Editor’s Note: The following article by Kent Finemore of DES was published by the Alliance in January 2010 as part of the state’s permitting process for replacing the dam. While aspects of the 2019 project may differ from this account, Finemore’s article provides interesting information about the dam’s history and importance. Note also that the natural mean high water mark for the lake is now 407.25, not 410′ as reported here.

The Ossipee Lake Dam actually consists of two structures: a concrete head works structure with five sluice gates and a concrete gravity spillway. Because there is a small island that separates these two structures, they were once considered two dams: the Head Works Dam (gates) and the Berry Bay Dam (spillway). The two dams collectively are often referred to as the Ossipee Lake Dam because they act as a single hydraulic feature. 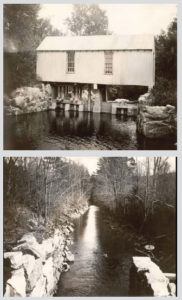 Gatehouse of the Head Works Dam (top) and the Ossipee River Channel, circa 1930. Photos: DES

The concrete piers of the spillway have cracked and are in danger of failing. Also, the concrete of the spillway has deteriorated to the point where reinforcing steel has been exposed, further threatening the integrity of the structure. Failure of the structure would result in property damage downstream and the loss of the 4,100-acre Ossipee Lake, an important recreational resource to the state, the shoreline of which is heavily developed with permanent and seasonal residences.

In addition to its structural deficiencies, the spillway of the dam does not have sufficient discharge capacity to safely pass floods. During flooding in 1998, the lack of the capacity to pass the flood water through the dam resulted in high water levels in Ossipee Lake which caused considerable flood damage to shoreline communities, residences and businesses.

Project Objectives
The proposed work is required to prevent the structure from failure; to add needed discharge capacity to the spillway to reduce the extent of property damage during flood events; and to comply with the requirements of New Hampshire state statutes and regulations pertaining to dam safety. The only feasible option is to replace the dam.

Preliminary plans include using the left overbank area (looking downstream) as the access and staging area for construction. DES records indicate that previous work on the spillway (Berry Bay Dam) has been staged from the right side of the dam (the Head Works side). An access was cleared to the site from the left side off Parsons Road in Freedom several years ago.

While the left overbank area gets inundated at least once in most years as water levels in the lake reach 410.0 (the Natural Mean High Water Mark elevation), our files do not document that the left overbank area has ever been significantly disturbed by excavation or other work. The canal constructed for the Head Works Dam, the parking area adjacent to the right side, and the use of these areas and the island between the two structures have resulted in significant disturbance over time of the right side of the river bank and the island.

Our intent at this time is to construct a replacement dam just downstream of the existing dam. The justifications for doing so include the following: 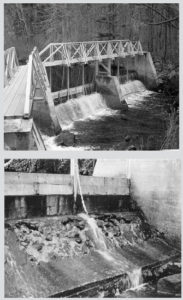 History
In 1878 and 1879, the Saco Water Power Company built the canal at Effingham Falls and a dam with gates at the head of the canal. The dam was originally built to store water for the hydroelectric power generated at downstream plants. No other information is available in Dam Bureau files about the original dam, including the extent to which the other channel was dammed to control outflow (what would now be the Berry Bay Dam).

According to construction plans dated 1944 (USAC, 1978), extensive modifications were made to the primary spillway (Berry Bay Dam) including construction of the service bridge, installation of the hinged stanchions and provisions for additional stop-logs. Repairs were made to the Berry Bay Dam in 1968, 1985, 1990 (significant repairs to the principal spillway), and the Head Works Dam in 1995 (new gates and gatehouse), and in 2000 (right abutment of the Head Works Dam).

Elevated Levels and Flooding
The watershed for Ossipee Lake is large in comparison to its storage capacity, which has resulted in elevated levels almost every year that inundate the left overbank and more significant flooding in some years. The most damaging flood on record occurred in 1998 when the watershed experienced 12 inches of rain over seven days, raising the lake level approximately nine feet over typical summer elevations. High flow conditions at the dam, which generally occur at least once a year, inundate the left overbank area of the Berry Bay Dam.

DES records and field survey work do not indicate the existence of any structures historically in the left overbank area, which may or may not stand to reason since that area often gets inundated to a distance of 60-100 feet from the edge of the river. Other significant flood event years include 1936, 1953, 1969, 1976, and 1987.