Freedom—September 6, 2018—I often see quite a few flickers moving through, with flocks of other birds, or in groupings of themselves. I notice their conspicuous white rump patch as these brown speckled birds fly up; rising off our lawns they have been briefly hunting on. Normally, flickers are open space birds and inhabit regions to the south of us, so I don’t know where they are migrating down from for us to see them.

Flickers look different from most of the woodpeckers we commonly see in the New England wilds. The downies and hairies we encounter have black-and-white plumages, with the males of these two species having bright red patches on their heads. They also have strong, chisel-like bills. The flicker is more of an odd ball in the woodpecker clan. It has a speckled, chestnut-brown body with a black crescent on its spotted breast, and a black mustache—when it is a male. We might see yellow under the surfaces of its wings and tail if it flies overhead.

The bird’s loud, high-pitched “Wick-wick-wick-wick” call gives it its common name. In the suburban East, the flicker is the most widely known of the woodpecker clan as it does not need mature trees or rotting older forest stubs to do its work on. They can live in suburban spaces instead, and have probably prospered and been with us since we started clearing the eastern forest for the openings we both crave. These woodpeckers exploit the best of two worlds—foraging on the ground, but dwelling in trees. 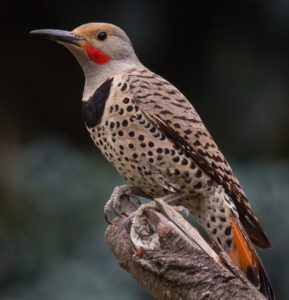 Flickers eat an enormous amount of ants—in fact, more than any other bird. Feeding with its long, barbed tongue, flickers can consume up to 5,000 ants a feeding! Large salivary glands also assist the bird in this unusual choice of forage. Flicking its sticky tongue into ant tunnels, it quickly gathers dozens of ants at each thrust. The parent bird then brings these back to the nesting cavity. Flickers gorge themselves on a multitude of ant species, and then regurgitate their swallowed meal to the noisy young.

Flickers also eat caterpillars, grubs, and other insects. All of this soft flicker slurry can be pumped into the babies’ throats by the adults. The young flickers will leave the nest about four weeks after hatching. 25% of this species’ diet is vegetable—consisting of native fruits and berries, which includes that of poison ivy in the fall and winter months!

In suburbia where these birds hunt ants down on the lawn surfaces, the presence of good nest-sites in older trees is at a premium. Since flickers like our newly settled, residential neighborhoods, chances are the street and shade trees are mostly young and green. And, probably not the necessary 12” minimum diameter these large woodpeckers need for a cavity within. Flickers’ bills are actually quite weak as woodpeckers go, so they need a fairly rotten tree or large limb in soft timber to process an excavation.  Punky wood inside an old white birch stub suits them fine.

I used to get orders for nest boxes for flickers, especially from the Rocky Mountain States. When some domicile out there lost an old, rotten snag in its backyard, it may lose its resident flicker pair, too. Flickers are known for accepting nest boxes, but they should have a bark slab front to be appealing to this species. A large birdhouse, and heavy, the interior dimensions should measure seven-by-seven inches, and be deep. The entrance hole of two-and-a-half inches to three inches should be at least 15 inches above the inside floor. An interesting technique for success is to fill this flicker box with wood shavings, right up to the hole.  This entices flickers to “excavate” the cavity, while it deters starlings from using the house at all.

Starlings are an introduced pest species, competent with their strong pointed beaks, so they are dangerous to our native cavity dwellers. They kill other parent birds as they begin to occupy a nest box, and are probably a greater enemy for flickers than they are to bluebirds. Starlings prefer boxes with six-by-six inch dimensions and up. They have been known to wait out a woodpecker’s excavation work, and then kill that bird after it just finishes its hard work.  Red-bellied woodpeckers in the south sometimes stand them off, while red-headed woodpeckers commonly win every time. For flickers, it is always a “maybe.”

Starlings are village birds, using eaves of older homes that have rotted out for their nesting spaces. An amazingly tough bird, they have driven off native cavity species in many Midwestern towns and urban spaces. Those woodpeckers that inhabit forest interiors and more remote country locations often escape the starlings’ intrusions, but not the flicker—due to its habitat requirements. I resent seeing starlings any time in New Hampshire.