Editor’s Note: This is a follow-up to Gordon DuBois’ 2017 article about Mount Whittier, which can be read here. Both pieces were published by the Laconia Daily Sun.

Ossipee–December 21, 2018–Many travelers driving on Route 16 in Ossipee must wonder about the large stanchion sitting near the junction with Route 25, in the McDonald’s parking lot. They probably ask themselves, “What are those towers used for?”

Those towers are recollections of the past, when small ski areas dotted the New Hampshire landscape. The towering relics of a bygone era carried skiers and tourists to the summit house of the Mount Whittier Ski Area. In the 1970s, I used to drive by the Mount Whittier Ski Area on my way to Maine. The parking lot on Route 16 was filled with cars and the tram was busy shuffling would-be skiers up the mountain to the summit.

Since Mount Whittier closed in 1985, the area has fallen into decay. Trails have become almost completely overgrown. Lifts have degraded to the point that they could never operate again. Despite all this, the gondola cable still remains, along with the towers, including one in a McDonalds’ parking lot. The owners tried to resurrect the area in the form of an amusement park, but could never seem to make a go of it. The towers are a reminder of times long past.

Two years ago, I hiked to the summit of what I thought was Mount Whittier to explore the ruins of this once-popular ski area. Along with four friends, we discovered the summit house, which housed Summit gondola station and a snack bar which provided a 360-degree view of the surrounding hills and mountains. We found rusted cables, T-bar stanchions, an old tanker truck, and other artifacts of a bygone era.

When I returned home from this escapade of discovery, I looked at a topographical map of the area and found the Mount Whittier Ski Area was actually located on Nickerson Mountain, near Grant Peak. Why was it called Whittier Ski Area and not Nickerson Ski Area? Whittier lies farther to the east in the town of Tamworth and is part of the well-known Ossipee Ring Dike, the remains of an ancient, extinct volcano. I also learned after visiting the website Lost New Hampshire Ski Areas that there was a small ski slope and cabin on Mount Whittier, not a large commercial slope, but one used by the Tamworth Outing Club and local residents.

It was common to find ski hills in almost every community, sometimes several. In New Hampton, where I live, there were two: the New Hew Hampton School ski area on Burleigh Mountain and Mail Box Hill on Old Bristol Road. Remains of these areas can still be seen, including the tow houses that held the car engines that ran the lift. A longtime resident of New Hampton told me the story of her scarf getting wrapped around the tow rope and being dragged up the hill, almost into the engine gears, before the tow was stopped.

More than 150 small and large ski areas, most now lost in the annals of history, were scattered across the state. Most communities had their own local ski slopes, usually with a rope tow, and some with a poma lift or T-Bar. Those small, local, family-oriented ski areas disappeared, replaced by mega-commercial ski resorts — Loon Mountain, Attitash, and Waterville Valley.

On an unusually warm and dry day last week (maybe the last of the year), I set out with several hiking friends — Beth, Diane, Bill S., Bill C., and Ken — to climb several remote peaks in the Tamworth area. My friends are on a quest to hike the highest 500 summits in New Hampshire (another list). I was just on a mission to locate the lost ski area on Mount Whittier.

We began our day by driving Route 25 to a side road in Tamworth where we turned left and headed into the recesses of the Ossipee Mountain Range. After a few miles of gravel roads, we parked our vehicles, loaded packs on our backs, and began our trek — a bushwhack — to find Bald Mountain and Whittier Mountain. The climb to the summit of Bald Mountain was interlaced with logging roads and open woods, so our ascent was fairly easy. When we reached the summit of Bald Mountain, we quickly signed the register hanging in a jar from the summit tree, had a snack, and planned the next foray.

Bill S., Diane, and Bill C. began a whack to Larcom Mountain, while Beth, Ken, and I set our compass bearings for Whittier Mountain and the lost ski area of Mount Whittier.

Little is known about the ski area, but I did learn from the New England Ski History website the following: The ski trails were probably cut by the Civilian Conservation Corps (CCC) in the late 1930s and a log cabin built at around 2,000 feet. In New England, the CCC built many ski areas, including Gunstock. The Mount Whittier ski area, although it was rather crude compared to other areas constructed by the CCC ,was most likely constructed to serve the Tamworth Outing Club and other ski enthusiasts from the Tamworth-Ossippe area. Mount Whittier hosted many giant slalom races in the 1940s and into the ’70s. College teams may have used it for practice as well as races, Dartmouth included. I’m sure the log cabin hosted many post-ski parties that lasted well into the night and the next day. There were no lifts, so skiers had to tote themselves and their skis up the mountain.

“The trail was laid out by Charlie Proctor of the Dartmouth ski program, back in the late 1930s. The trail was cut by either the CCC or WPA as a work project. It was the land of Walter and Mabel Evans.” Tamworth Civic News, January 15, 1999. 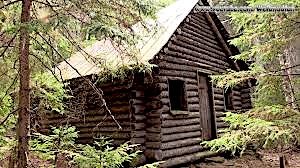 Cabin for the original ski slope on Mount Whittier, likely built in the 1930s and used by the Tamworth Outing Club. Image: YouTube

After summiting the peak of Whittier Mountain, we dropped down the northwest side of the mountain to about 2,000 feet and began looking for the cabin. While I was searching in the woods, a shout rang out from Beth, “I found it.” I didn’t know what to expect, but I was surprised to see the cabin, in fairly good shape after 80 years since it was built. It had certainly seen better days, but the spruce logs of the walls had weathered well and the roof still provided shelter from rain and snow. The disappointment was the trash and garbage left behind by numerous visitors. Even though the cabin was run down and dilapidated, it stood with a certain dignity and was a salute to the men of the CCC who built the structure, men who were unemployed and possibly downtrodden, living on the margins, many of them immigrants. But they had the fortitude, skill and pride to build a cabin that still stands today and cut ski trails on the side of a remote mountain. With a major cleanup of the area and a few repairs to the cabin, it could be returned to its original condition when it was built in the 1930s.

As we searched for the lost and overgrown ski trails, my mind began to envision skiers warming themselves in the cabin, hunkered down next to the wood stove, and skiers swooshing down the slope and lugging their skis back to the cabin. There were no T-bars, rope tows or elaborate chair lifts at this ski area. Skiers had to hike up the mountain to ski down it. Since it had a 1,650-foot vertical descent, this was no easy task.

My wandering mind came to a halt when Beth and Ken started packing up and readying themselves for bushwhacking back to our cars. Leaving the cabin, I felt nostalgic, thinking back to the day when skiing a mountain didn’t cost an “arm and a leg” and you had to earn your trip down the mountain by hiking up it.

There are many more abandoned and lost ski areas throughout New England. You may try to find a few of these yourself. Check out the website www.nelsap.org/nh/nh.htm to learn more about these relics from the past, and take the opportunity to discover the lost ski areas of New Hampshire.

Many thanks to Jeremy Clark, from Gilford, who helped us find the real Mount Whittier and to those who are preserving the history of skiing in New England, the place where it all began in the United States.