Freedom—December 15, 2019—The weather has been kind to the construction teams building the new Ossipee Lake Dam. If Mother Nature continues to cooperate, work will continue until Christmas before being put on hold for the winter.

That would mean the project will be on time—albeit on time regarding the truncated schedule that was pulled together after a planned April start had to be scrapped because of funding uncertainties.

The scope of the work is captured in this shot. Photo: Tim Otterbach.

Thanks to good luck and good planning by the Dam Bureau, the construction teams were able to hit the ground running on August 5, just days after the governor signed paperwork releasing the money. Since then, the drill has been to stay focused and hope the winter weather holds off.

On a cold, rainy morning last month, members of the Alliance’s board donned slickers and hard hats to document the construction work while preparations were being made to pour massive amounts of concrete for the dam basin.

Completing the concrete work before Christmas is a key project goal, according to Grace Levergood, the Dam Bureau’s Design Engineer. She and Doug Sargent of Wright-Pierce Engineering guided the Alliance group up and down ladders and over temporary wooden bridges as workers swarmed the crowded, muddy site. 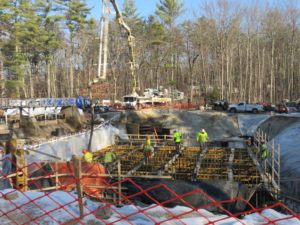 Cement trucks line up in the background, waiting to drop their loads at the worksite. Photo: Emelyn Albert

A week later, cement trucks began lining up along Parsons Road to access the worksite and drop as many as seven cement loads per hour, according to Emelyn Albert, who visited the site.

The most recent visitor from the Alliance was Tim Otterbach. Last week he reported that the dam’s horizontal concrete work had been completed, and workers were forming the side walls and corner wing walls.

He said that by the end of this week, concrete for the far wall, two upstream wing walls and the near side wall should be finished. That would leave the middle wall and the remaining downstream corner wing walls to be poured on the day before Christmas.

Following the stripping of the forms, the large boulders will be moved into place upstream and downstream from the dam structure, and the gaps beyond the sidewalls will be infilled. This will allow water to flow over the new structure throughout the winter, and will accommodate the additional waters from the spring melt run-off. 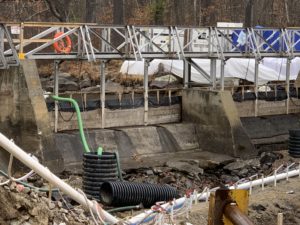 The deterioration of the base of the old dam became evident when construction work began. Photo: David Smith

When completed, nearly 2,000 yards of concrete will have been placed.

“Quite an aggressive schedule,” Otterbach commented after his site visit.