The following article is courtesy of NH LAKES.

Concord—January 5, 2020—If you are one of those hearty New Englanders who stays in New Hampshire during the winter and doesn’t flock south to a tropical locale, you may be wondering, “Well, where do the loons go in winter—do they go south, too?”

Common Loons, with their characteristic black and white checkered back and wings, black head, white “necklace” around their throat, and red eyes, leave New Hampshire for the winter. But they typically don’t go too far—and they certainly don’t bask in the sun in some exotic and warm vacation paradise.

Loons Migrate for the Winter
Banding and satellite tracking studies conducted by the Loon Preservation Committee have discovered that loons escape the freezing of New Hampshire’s lakes and ponds by spending the winter off the coast of the Atlantic Ocean from Maine to Rhode Island. While there is a lot that biologists still don’t know about loon migration, they do know that loons don’t leave New Hampshire because they feel like it, but rather, because they have to.

Loons are heavy birds with very large feet and, like an airplane, they need long runways to take off. Loons run awkwardly across the water surface for approximately a quarter-mile to pick up speed before being able to take fight. If the lake is covered with ice, they can’t run for lift-off, causing them to become trapped, and eventually causing them to perish if they aren’t rescued. Loons don’t leave New Hampshire in search of warmer waters down south where the lakes don’t freeze because these waters are too dangerous— alligators and waterbodies that are too warm or too shallow for diving and hunting create big problems for these birds. 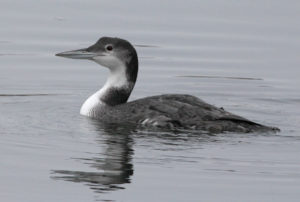 A Common Loon in winter plumage.

The adult loons generally migrate first in large groups, usually two or three months after their chicks hatch and after their beautiful black and white feathers have been replaced by plain brownish-grey feathers. The offspring stay behind until their flight feathers become long enough to support their weight—this time also allows the chicks to become capable of surviving on their own before they fly to the ocean. Typically, chicks do not leave their birth lake until just before it freezes. Biologists do not know exactly how the young loons know where to go—this is one of many mysteries. Chicks won’t return to their birth lake until they are approximately three or four years old, and they won’t be able to reproduce until they are six or seven.

What Do Loons Do During the Winter?
Once they reach the ocean, loons must adapt to life in salt water. Fortunately, loons have salt glands in their skull between their eyes that remove the salt from the water and fish they eat and excrete it from ducts in their beak. The ocean provides very clear, deep open water for the loons to dive and fish. They group together riding the waves and hunting in the shallow waters trapping schools of fish and filling their stomachs.

In late-winter, their dull winter coat is replaced by a beautiful black and white breeding coat, replacing their worn out feathers with strong feathers to fly with, a process called ‘molting.’ Loons lose all their feathers at once, instead of losing one or two at a time like most birds, because they need a complete set of flight feathers to hold up their heavy bodies. If a loon were to try and fly with just a few missing feathers, its wings wouldn’t be big enough to hold up its body. During this approximately two- to three- week molting period, loons are unable to fly and are in great danger—they must expend a great deal of energy to grow new feathers and they have less energy to fight off illnesses or toxins stored in their body fat. Make no mistake—life on the ocean is not easy for these creatures. Loons must not only adjust to the stress of molting and a different diet, they must also endure the stress of rough coastal waters, stormy weather, marine pollution, and parasites.

When and Where Do the Loons Return?
Biologists suspect that loons return to the same general area where they were born, often returning to their very own birth lake. Loons will typically arrive on New Hampshire’s lakes and ponds just after ice-out, sometimes on the very next day! To learn more about these fascinating birds, check out the Loon Preservation Committee’s website at www.loon.org.

NH LAKES is the only statewide, member-supported nonprofit organization working to keep New Hampshire’s lakes clean and healthy, now and in the future. The organization works with partners, promotes clean water policies and responsible use, and inspires the public to care for our lakes. For information, visit www.nhlakes.org, email info@nhlakes.org, or call 603.226.0299.