Freedom—April 21, 2020—The board of the New Hampshire Municipal Association yesterday sent the governor a letter asking him to keep campgrounds closed, saying an influx of out of state visitors could spike the number of COVID-19 cases.

The letter aligns the non-partisan organization with a growing chorus of its member towns who believe that exempting campgrounds from the state’s list of non-essential businesses was a mistake that poses a threat to public health.

Most of the state’s hotels, motels and inns were ordered to close weeks ago as part of the governor’s plan to address the pandemic. Campgrounds, however, were specifically deemed to be “essential businesses,” making them exempt from the order.

In its letter, Municipal Association Executive Director Margaret Byrnes said campers tend to stay in the area even longer than hotel guests, and come in regular contact with local residents when shopping at groceries and pharmacies. 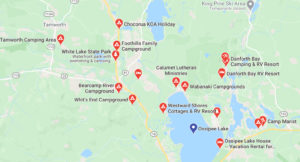 Map shows some of the many campgrounds on Ossipee Lake and in the surrounding area. Google Maps

“All of this puts New Hampshire residents at significantly increased risk of contracting COVID-19,” she wrote. “This will, in turn, put local first responders and medical personnel at greater risk than they already are.”

Byrnes cited the Town of Albany as an example. Albany has seven campgrounds and a year-round population of 738. Its medical needs are served by 25-bed Memorial Hospital in North Conway.

“It would be easier to close campgrounds now than to allow them to open and then order them closed at the peak of the season” if there is a spread of the virus, Byrnes said.

Freedom, Ossipee and Tamworth are among the towns that have warned the state that the health care system could be overwhelmed if an influx of people from coronavirus hot spots take up residence in private campgrounds.

Freedom’s State Representative Jerry Knirk is one of the leading opponents of opening the campgrounds. Last week he said resort-like campgrounds that are marketed and managed like hotels should have been grouped with hotels and other lodgings that are required to be closed.

The Town of Ossipee also opposes opening campgrounds at this time. In a letter to the governor, Town Administrator Matt Sawyer cited a likely increase in demand by campers for already over-burdened supplies as well as the potential spread of the virus.

There are several dozen campgrounds in the Ossipee Lake area and many more in the region. On the lake itself, the facilities range from low-key businesses like Terrace Pines to more elaborate properties like Westward Shores. Danforth Pond has two large, related facilities in Danforth Bay Camping and RV Resort, and the RV-only property The Bluffs.

Campers Speak
Meanwhile, campers are looking for a say in the discussion. An Ossipee Lake Alliance story on Monday generated 15 online posts as of Tuesday afternoon, while there were 25 responses to articles in the Conway Daily Sun. The posts appeared to be evenly divided between those who want campgrounds open and those who are opposed.

For some proponents of having campgrounds open, like the writer “Freedom Messenger,” the issue is monetary:

“I’m a seasonal at Danforth Bay and pay Freedom taxes. If this state rep wants to close the campground, then state and town should give back all the tax money and seasonal fees to all seasonal campers. Then, I will be glad to stay home for everyone’s safety.”

Others see the issue as a matter of fairness. Per “RDuffey656”:

“Why are you singling out campers, especially seasonal campers…? What is the difference between me coming to my camper that I live in, that’s my home for 7 months a year, and someone coming to their summer home if we behave responsibly?”

“We are full-time RV-ers and we own a self-contained motorhome. We should be able to use our camp because we (as well as others in the same situation) don’t have anywhere else to go.”

The plight of having ‘nowhere else to go’ is understood by local officials. Unlike transient visitors, full-season campers spend half the year here and pay taxes on top of camping fees. Many feel like they’re part of the community.

That said, with the virus continuing to spread and no plan in place to address a potential wide-scale spread of the disease by those coming from out of state, local officials want campgrounds to stay closed until medical officials say it’s safe to open them.

Ironically, as campgrounds prepare to open as early as next week, the governor continues to warn that there are too many COVID-19 cases to safely reopen non-essential businesses such as hotels, motels and inns.

“We’re not anywhere near that right now, to be honest about it” he told the N.H. Union Leader on Friday.