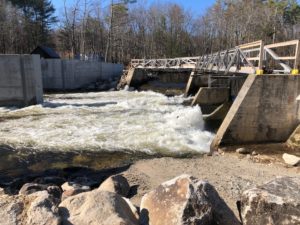 We started last week with an almost complete cover of ice with snow on the north end of Broad Bay. Then some rain and temperature in the 50s. Sunday morning there was a sheet of ice on about half of Broad Bay North.  Temperature in early 50s and steady wind out of the SW. By late afternoon only two card table-size chunks of ice remained in the Huckins Bay. They finally escaped and went east, never to be viewed again.

I heard three power boats out in the bay Sunday afternoon but never saw them. Earlier in the week, our dog walker saw two groups of geese attempting to take ownership of a pool of open water on the north end of the bay where the stream from the Danforth Ponds comes into the bay. Sunday morning there were two loons in the same spot.

As for Water Out…
I just received word from Concord that the schedule this spring is the same as previous years. The present water level is 408′. It will be lowered to about 405′ so that stop logs can be safely placed back in the north side dam. This should be sometime near the end of May. The level will then be brought to the summer “normal” level of 407.25′ by June 1. In 20 years of watching, the level has never been late.

This should be the last year of spring drawdown below 407′ because the new dam, scheduled for completion by end of the year, will eliminate stop log removal and installation.

Time for a fresh cup of coffee on the deck over the bay.