Freedom—July 6, 2020—Boaters defied the state by packing the channel sandbar this holiday weekend despite an unusual public plea from the Marine Patrol “to assist them” by following social distancing recommendations and complying with rafting rules during the pandemic.

More than 70 boats congregated closely Saturday on and around the sandbar at the junction of Cassie Cove, Turtle Cove and Spindle Point, which is one of the most popular rafting venues on the lake. The number of boats was smaller on Sunday, but there continued to be little to no social distancing.

With COVID-19 spreading in the state, the Marine Patrol in May announced boating guidance that included “No Rafting—Keep Your Distance on the Water” and “No Guests on Your Boat” as key provisions.

The ‘no guests’ advisory included “family members not in your immediate household and your closest boating buddies,” according to the poster, which appeared online and in various boating locales. Social media reaction to the guidelines was largely positive.

Marine Patrol Captain Timothy Dunleavy told Ossipee Lake Alliance the guidelines were based on recommendations by the CDC and the U.S. Coast Guard, adding he hoped boaters would “encourage each other to do the right thing” by complying.

That didn’t happen this weekend, and a large increase in boats on the lake compounded the problem.

Lake Hosts in Ossipee have seen week-to-week increases in visitors at the Route 25 public boat ramp, with traffic congestion and overflow parking. On Saturday the facility was at capacity by 9:30 a.m. as boaters continued to arrive. By the middle of the day, boats and trailers lined the shoulder of the highway as far west as the hardware store. 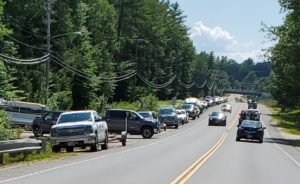 A spike in day-tripping boaters is creating concerns about crowding on the lake.

An officer from N.H. Fish & Game, which manages the site, visited on Saturday but was not present when a boater ran his car over the Lake Host program’s boat inspection signs and took off without stopping. The host was not hurt.

A post by Lauren Lynn Christopher Ryan on the “I Boat on Ossipee Lake” Facebook page said: “I’ve been on Ossipee Lake for 30 plus years and have never seen it as crazy as Saturday was. I actually felt like our poor lake was too small for all these boats.”

Of the close to 90 comments made to the post, most expressed agreement.

Sandbar Rafting Concerns Revived
The state’s social distancing guidelines are voluntary, but compliance with state rafting regulations are not. The situation at the channel sandbar is complicated, however.

The sandbar became a state-regulated area in 2001 as a result of a petition by neighboring property owners who argued that crowds at the site had created a public nuisance and safety issues.

State Rule Saf-C 407.04 limits “rafts” to 10 boats that must stay 50 feet from the main navigation channel and be gone by sunset. But the rule is flawed. For one thing it can be interpreted as restricting the total number of boats to 10, or interpreted as permitting an unlimited number of “rafts” of boats each comprised of 10 vessels. Additionally, the rule conflicts with the stricter terms of State Law RSA 270:44, which sets limits on the size of rafts and the parameters for their separation in the water. 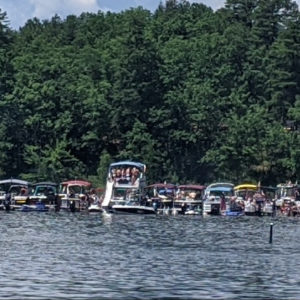 Boaters jammed the channel sandbar on July 4, renewing focus on a 2001 state rule meant to control rafting there.

As a result, the sandbar rule has never been enforced, and the public nuisance and safety issues the petitioners identified 20 years ago remain more or less the same, according to neighboring property owners.

“The rule is flawed because the petition was flawed,” a state official told Ossipee Lake Alliance, asking that we not use his name. “A new petition could address that,” he added.

Boaters’ defiance of the state’s request for cooperation this weekend could be a tipping point for the issue, judging from online posts.

On the Ossipee Lake Alliance website, Thom wrote: “The 50’ rule from the main navigation channel is laughable. Boats are regularly anchored within 10 ft of a channel marker. The sandbar was completely packed today, as it is every weekend day.”

Cassie Cove property owner Linda Taylor wrote: “By the middle of the day [the sandbar] is packed with people and we have to endure loud music, offensive language and many rude people.”

“We pick up beer cans, plastic cups, plastic bags of dog feces every weekend…Once the sandbar is filled way over capacity, the boaters anchor all over the cove to swim, and jet skiers race around,” she added.

In regard to the pandemic and social distancing, “Lara”: wrote: “We have been horrified at the number of people we have seen at this sandbar for the past 3 weekends when we go past. We often remark, “well, there’s the next epicenter of the virus outbreak.”