Freedom—July 14, 2020—Members of the state’s Commission to Study Wake Boats reached consensus on several measures to improve boater safety, but disagreed on whether there should be limits on where wake boats can be operated.

Wake boats are designed or modified to take on enough ballast to lower the stern and displace more water than a typical powerboat. The sport of “boarding” has two styles—wakeboarding and wakesurfing—both of which rely on having a boat that can create a very large wake.

In its summary report, issued last week, the Commission recommended that wake boat operators be required to have an observer onboard and ensure that boarders are wearing a life jacket. It also agreed that “wakesurfing” should be given a definition in RSA 270-D:1, which defines basic boating terms including “waterskiing” and “headway speed.”

But the Commission was divided on whether the public should be allowed to petition the state to limit wake boat use in specific areas on a case by case basis. It also failed to reach agreement on whether to establish statutory criteria to define “wake boats,” “tow boats” and “ballast boats,” which would be a prerequisite for regulating such watercraft, and took no action on recommending how to address the spread of microscopic particles of invasive species that ‘hitchhike’ from lake to lake in ballast tanks.

Despite its limited actionable recommendations, the Commission’s report provides a valuable compendium of information about wake boats that did not exist a year ago. 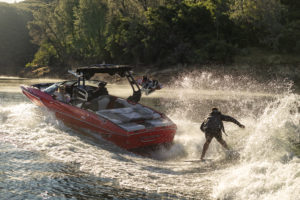 Online ad for Supreme Boats, one of many companies specializing in wake boats.

The report’s evaluation of scientific data—including water turbidity, bank slope characteristics and wave dynamics—makes for dense reading. But the report is clear on one point: waves from wake boat have the potential to be larger and more powerful than those created by other watercraft of similar size and shape.

Research sponsored by the Water Sport Industry Association (WSIA) in 2015 found wave heights for wakeboarding were 43% higher than when the same boat was cruising and not towing a boarder. Waves for wakesurfing were 114% higher, using the same comparison.

In regard to wave energy (discussed in detail in the report) the WSIA study found waves from wakeboarding generated 179% more wave energy than waves from the boat when cruising, and 720% more energy for the same boat when wakesurfing.

Commission members favoring legislation say the industry’s own scientific data shows wake boats are not suited to all bodies of water. They believe the public should be allowed to petition to have wake craft use limited under certain circumstances, such as when shoreline erosion is inevitable, and in areas where they pose a threat to swimmers, smaller watercraft and loon nests.

“It seems incompatible with all but the center of our largest lakes that such a large swath of water would be taken by one boat and all the rest would have to cope,” per the report.

Wake boat proponents don’t deny the science or the potential negative impact the boats can have. But they believe education and voluntary changes in boater behavior are the best ways “to foster a peaceful environment on all waterways.”

Trade industry guidance for boaters, such as this video, acknowledge complaints about wake boats by recommending limiting the number of repetitive passes along residential shorelines, keeping music at reasonable levels, and staying 200 feet from shorelines, docks and other boats. (State law requires 150 feet of distance). 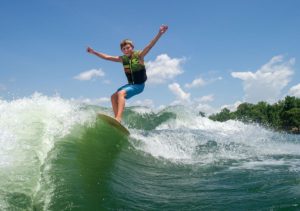 Proponents also point out that wake boats are popular, bring vacationers to our lakes, and fill coffers in a state that is among the top ten in its reliance on outdoor recreation revenue.

In a letter to the Commission, the Lakes Region Tourism Association wrote that “establishing limitations or regulations on wake boats…would put an added burden on the economy during an increasingly difficult time.”

Reasonable Use
The state’s public trust doctrine frames the wake boat debate. As it pertains to lakes, the doctrine seeks to balance competing uses between shorefront property owners and the public. This balancing act is rooted in the concept of “reasonable use.”

As a result of hearings, jet skis were prohibited from some bodies of water, and on others were ordered to operate no closer than 300 feet from shore rather than the standard 150 feet. The combination of targeted regulations and manufacturing changes to the watercraft worked, and today there are few conflicts between operators and property owners, according to the report.

Proponents of legislation for wake boats believe a similar process could bridge the gap between wake sports enthusiasts and those concerned about their impact by identifying where wake boats can be operated safely and without creating environmental damage.

“It would also allow for industry recommendations to become law (no towing within 200 feet of shore) that otherwise would be ignored for lack of consequences,” per the report.

Those opposed to allowing such regulation say many types of boats can create large wakes under certain circumstances, not just wake boats.

Moreover, they say, local control will result in “piecemeal regulation” and create a process that “pits neighbor against neighbor and promotes long term animosity” while “reducing the value of a boater’s investment.”