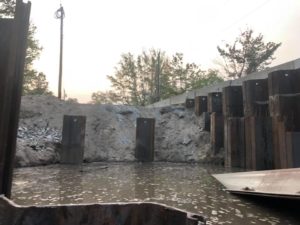 Freedom—October 2, 2020—The project to replace the aging Danforth Brook Bridge on Ossipee Lake Road experienced yet another delay when Freedom officials on Wednesday closed the structure to trucks after tests revealed a load-bearing discrepancy with the approved bridge design.

In an email to Ossipee Lake Alliance, Freedom Town Administrator Ellen White said additional bore hole testing was completed a week and a half ago after a “boil” was detected shortly after removal of the existing bridge footing.

“In short, calculations from the testing do not support the load bearing capacity that was indicated in the original bridge design,” White wrote.

To err on the side of caution, White said the Select Board decided to limit traffic to passenger vehicles “in part due to the fact that the remaining bridge has been compromised with the work that has already been completed.”

The project engineering team is working on two options to resolve the load bearing capacity concerns. One is to install one larger footing instead of four to help spread the weight load, and the other is to drive additional pilings to help support the footings.

Once a choice is made, the town will determine and announce the implications to the project’s cost and timing for completion.

The $1.1 million project was approved last autumn after years of delays in obtaining state funds. The structure, built in 1925, is long past its 50-year life expectancy. Boat access to and from Danforth Pond was closed on August 10 as primary construction commenced.

Social media posts on Thursday indicated that signs were not yet in place to warn truckers that the bridge is limited to passenger vehicles.