This is the latest of my reports on progress at the new Ossipee Lake Dam, including a video of the demolition of the old dam:

Photo 1: The view looking toward the new Headhouse and propane tank platform. All of the stairs are installed, and the bulk of the galvanized steel has been installed. The only remaining portion is the installation of the safety rails at the top of the propane platform to satisfy an O.S.H.A. safety requirement. They will be installed next week.

Photo 2: Atop the new catwalk over the new dam, looking back at the new Headhouse. The hydraulic actuators to operate the gates are not yet connected. They will be connected this coming week, and the testing of the hydraulic system and gate-raising and gate-lowering will be completed.

Photo 3: Photo of the formwork for the final grouting on the dam walls, at the ends of the gates, to encase the conduits for the plate heaters. This is the final concrete work to be accomplished on the project.

Photo 4: Detail of the final concrete work and the wiring and hydraulic lines for the plate heaters and the gates.

Photo 5: A view of the dam from upstream, with most of the stop blocks lowered in place to test-fit them. The bulk of the blocks are currently on site. The remainder will arrive this coming week. The end sections were not installed in order to provide access to the downstream side of the gates. When not lowered in place, the stop blocks will be stored in the headhouse at the far end of the catwalk.

Photo 6: A view from upstream of the new dam looking at the old dam. The existing catwalk, railing and steel drop block posts have all been removed. The white “super sacks” have been placed upstream from the old dam to prevent water from flowing over the old dam during its demolition. Looking beyond the dam into lower Berry Bay you can see how much the water has dropped from the fall drawdown. It looks similar to the seashore at low tide……interesting!

Photo 7: A view of the old dam and the new dam. The super sacks and black plastic water barrier are in place preventing any water flow over the old dam during its demolition.

Photo 8: View looking over the old dam to the new dam, showing the majority of new drop blocks in place, which are set at the level they will be installed when required maintenance to the gates is being performed.

Photo 9: Looking down on the installed new drop blocks, between the steel beams. These blocks will be lowered manually when service or maintenance of the gates, or the gate hydraulics and electrical components, is required. The 224 drop blocks will all be stored in the new Headhouse, where the hydraulic equipment is also housed.

Photo 10: Charter Construction Company’s back hoe with hydraulic hammer attached breaking up the first, (easternmost), concrete piers and spillway of the old dam. The entire concrete demolition was expected to be completed by the end of day Friday, November 13. Here’s a video of the demolition.

Photo 12: A view from the new catwalk, looking at the new rip-rap being installed between the new dam and the location of the old dam (now demolished and removed).

Photo 13: Stone rip-rap placement underway at the west end of the dam. The area was cleared of all demolition debris and  leveled, and geotextile fabric was laid down prior to the placement of the large stones. The rip-rap will extend upstream to the base of the super sacks, which are sitting on existing undisturbed river bottom stones. The operator of the excavator, with the use of the bucket and a hydraulically operated “thumb” places each stone strategically, to form a new monolithic river bottom. This operation is both a science and an art, and this operator is quite the artist.

Photo 14: Laying parallel to the low wing wall at the East end and of the dam is one of the original timbers placed when the early wooden dam was constructed. The first course of timbers were primarily logs 16″ to 24″ in diameter, which were spiked together with successive courses of timbers to form the dam. To the left of the timber is a section of the geotextile mat which is placed on the river bottom prior to the placing of the rip-rap stones.

Photo 15: One of the original dam timbers being removed by the backhoe. These old timbers were exposed once the old concrete dam wing walls and spillways were demolished and removed.

Photo 16: Several of the old timbers removed from the location of the base of the old dam are staked-up to the right of the excavator. Once the remaining timbers are removed, the placement of the geotextile fabric and the rip-rap will continue to the right side of the dam, (slightly beyond the limits of the super sacks. When the rip-rap stone placement is completed, the super sacks  will be removed and, with minor stone adjustment at their previous locations. the river bed will be fully restored to accommodate spring lake water flow.

Photo 17: A hand-wrought spike from old wood dam. These were used to spike together the wooden structure which preceded the now-demolished dam. Size: Approximately 7¼” long and 1/2″ square. Shown next to a quarter to give a sense of scale.

Photo 18: The project sign at Charter Construction Company and the trailer on site. 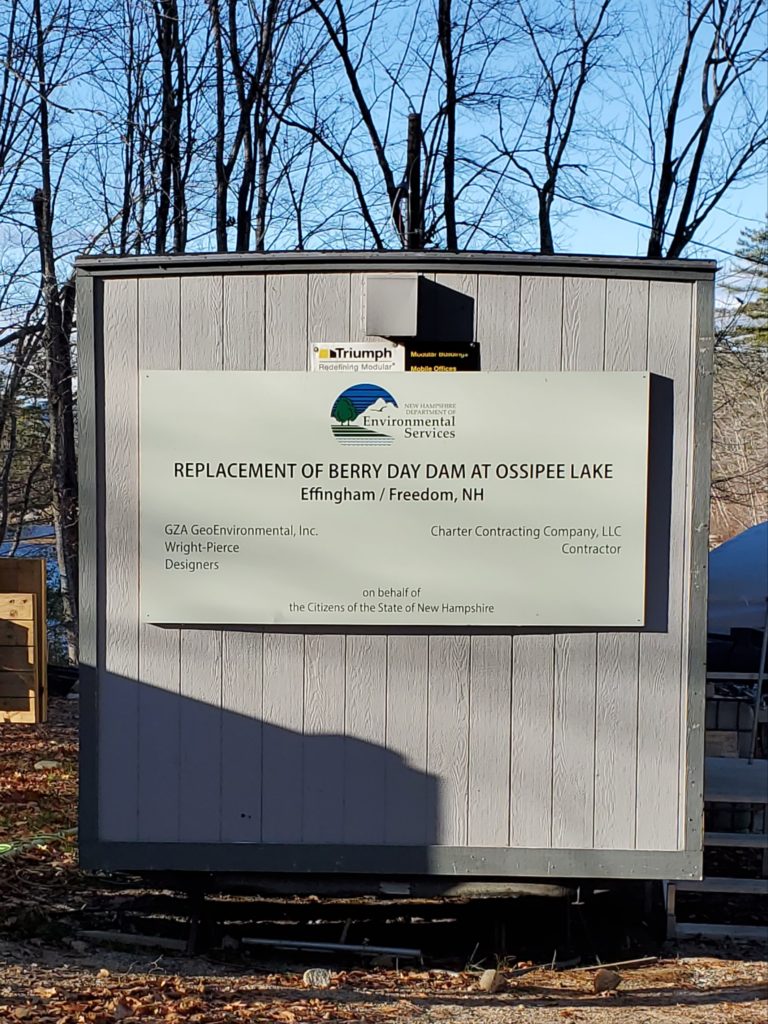 I want to take this time to give a hearty “thanks” to the on-site crew, both from Charter and their sub-contractors, who have done an outstanding job with this project, even during difficult site and weather conditions. Coming next week and the following week, photographs and hopefully a short video of the gate-testing with the hydraulics in full operation.