Ossipee—March 29, 2021—Divers tethered to a line had to combat fog, floating ice chunks and murky water “under conditions that were not ideal for their safety” while searching for a Lowell, Mass., woman who was reported missing two weeks earlier, said New Hampshire State Police Monday.

Meanwhile, the family of Sinead Lyons, whose body was found in Ossipee Lake after an extensive search last Friday, said Sunday that her dog also found in the lake, but police are disputing that report.

On March 14, Lowell, Mass., police informed New Hampshire State Police and other law enforcement agencies that Lyons, 41, had been reported missing and she might be in the area.

The next day, her white 2005 Volvo V70 station wagon was found at Constitution Park near Ossipee Lake. Police searched the park March 16, did a boat search March 18 and then conducted another large search March 25 after snow had melted.

On the afternoon of March 26, state police announced that Lyons’ body had been discovered in 12½ feet of water at 2 p.m. by a dive team. 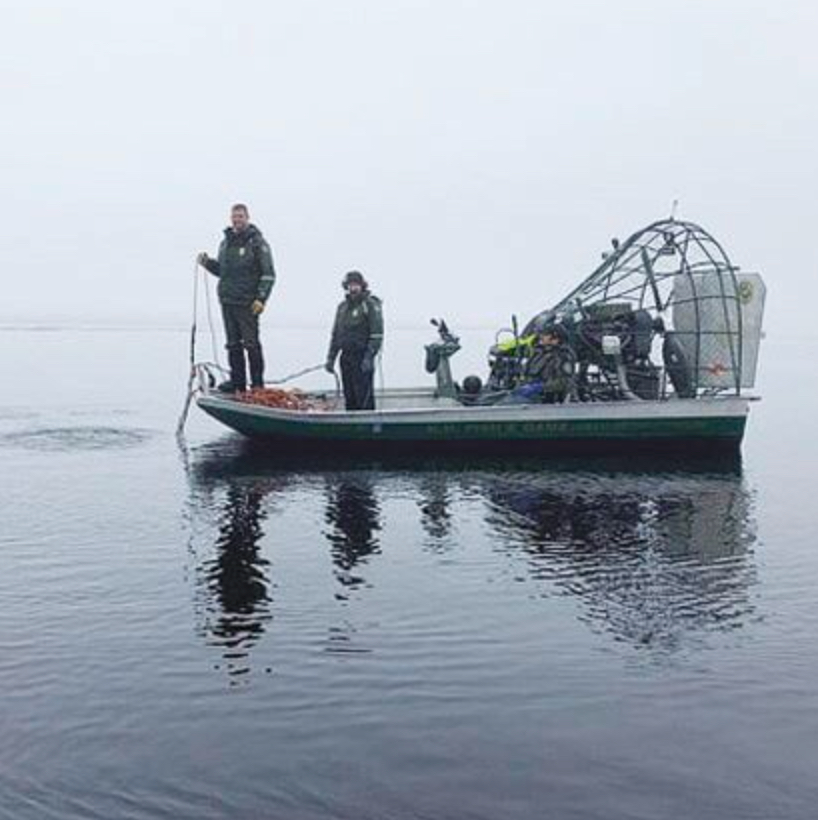 The Office of the Chief Medical Examiner determined that Lyons’ death was not suspicious.

Her German shepherd dog, Flossie, seen with the 5’11” blonde Lyons near the lake on March 12, had not been found, state police said last Friday. On Sunday, however, Lyons’ family announced on Facebook that Flossie had also been found.

“Our beloved daughter, Sinead and her dearly loved dog Flossie have been found. They suffered a tragic accident and both sadly passed away. We, her family, are heartbroken,” they said.

Capt. Michael Eastman of New Hampshire Fish and Game, who commanded the scene from the shore with Lt. Bradley Morse of Fish and Game, said the dive team thought they had a “blip” on their sonar that could have been Flossie, but when the divers went to recover Lyons they couldn’t find the dog.

Eastman explained that warmer temperatures had opened a 50-foot gap of open water between two plates of ice where a pressure ridge had been formed by the Pine River Inlet.

Eastman said the underwater geography the lake bottom can make ice thickness variable. “What I suspect (Lyons) was trying to do was that she was trying to cross this pressure ridge,” he said.

He said ice around the pressure ridge has a tendency to separate or erode due to sunlight or underwater current.

Fish and Game utilized four divers, a dive master and a dive tender while searching for Lyons, said Eastman. The divers were connected to a line with a weight that kept them at the proper depth. The depth was controlled with a winch. Those lines have a handhold for the diver, a communication line that connects to the mask and a connection to the divers’ harness.

The system conserves the divers’ energy. “If you were kicking around for an hour, you’d be tired out,” said Eastman, who added the system also ensures that the divers can find their way back up to the surface.

It took about 23 minutes to locate Lyons from the time the boats were in the water, said Eastman.

Lt. Jim Fogarty of N.H. State Police said when Fish and Game went out on an airboat on March 18, their access to the lake was limited by ice. He said the searchers, who entered the lake off Nichols Road, looked at an area that had a “high probability” of finding her, based on evidence such as cellphone data and witness testimony.

The entire time she was missing, detectives canvassed the lakefront, knocking on doors trying to find people who might have seen her.

On their second attempt on March 26, Fish and Game launched from the Weetamoe Road area in the southwest corner of the lake.

As for the dog, Fogarty said Monday that Flossie “has not been retrieved at this time” and is probably still in the lake. There will be an effort to find the dog at a later time, he said.

Both Morse and Fogarty said fog limited visibility during the search and that chunks of floating ice also challenged the team.

“What they did was done under conditions that were not ideal for their safety,” said Fogarty,

He said New Hampshire State Police appreciates the efforts of Fish and Game, Carroll County Sheriff’s Office, Center and West Ossipee Fire Departments, Ossipee Police and all those who helped.

Fogarty said a witness saw Lyons playing with her dog on the lake near the Pine River inlet. She had told her friends and family she was coming to the area to hike with Flossie.

“What she told her friends and family that she was going to go do, she did,” said Fogarty, adding there was no evidence of foul play.

Fogarty said two witnesses were instrumental in finding Lyons. The first person saw Lyons enter the lake from a path from Constitution Park, and the second person saw her with the dog in the Weetamoe Road area, perhaps about a mile from where she entered the lake.

“We received information from two eyewitnesses to Ms. Lyons being near the lake and upon the ice on the lake,” said Fogarty. “So that eyewitness testimony was actually pivotal in her discovery.