Editor’s Note: Dave Eastman, who died last year, was a long-time friend and a prolific local nature writer. About four years ago, he tapped into his archive of essays and sent us the ones he felt were the most relevant to the Ossipee Lake community. In his memory, we are continuing to post these pieces.

This article originally appeared in the Conway Daily Sun on April 24, 2010.

The spotted sandpiper is usually our only native shorebird of that ilk to enjoy here; and most times it doesn’t get much sand to work over in N.H.! Most of our secluded woodland ponds have fairly organic shorelines of muck and woody debris instead of accreted sandy shores.

As spring progresses, I sometimes notice one at the water’s edge of the Bearcamp River, near whose banks I reside. A slight motion is what I notice first; it is such a tiny creature characteristically teetering its tail and rump up and down, as it probes for insect life and crustaceans. It hops over the boulders and cobbles among the river’s corridor, working over the algal surfaces for possibilities.

This small speckled bird leaves us with an amusing impression of being a bit too delicately balanced, as it walks with its little body leaning forward, and keeping the head low.
The spotted sandpiper is found everywhere in the country, and commonly is seen perched on a slanted log stretching into the brown water. I have often watched this particular species working over the rocks sticking up out of a wild river’s rapids, skillfully avoiding being swept into the current as it probes.  Flitting from one rock to another without any trouble, while never getting knocked off into the white water, it continues searching the boulders creating those rapids.

I have heard that spotted sandpipers can also swim and dive readily. using their wings underwater like the water ouzel does, as this dipper walks on the gravelly bottom of the West’s streams.    This is one of the first birds to show up in the emerging spring while the trees are just budding up. The small spotted sandpiper has returned here from wintering as far south as Uruguay, northern Chile, and northern Argentina. 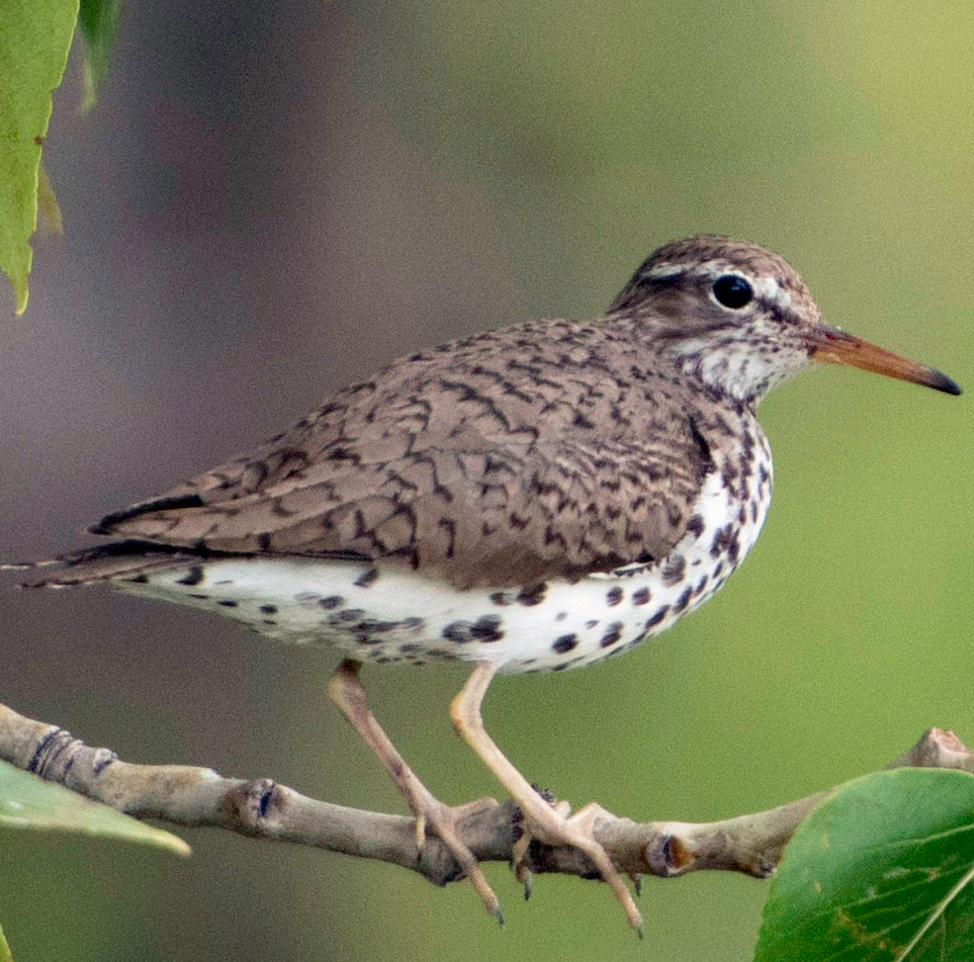 Our common sandpiper flies low over the water with the quivering wings held stiffly, and bowed slightly downward. The bird’s short, shallow wingbeats alternate with gliding flight. If alarmed or flushed, it may give out with its characteristic “peet-weet-weet-weet” call, whenever we sometimes surprise it during its shoreline hunting. Children delight in sighting this small bird with its olive-brown back and round black spots on its whitish breast—though these markings fade towards fall.

There is always something mystical and pleasing at suddenly finding a sandpiper, especially as it quickly flies away from us. We watch its flight skimming over the surface, rocking from one side to another, and then soon swinging in to land again farther down the border of a sheltered pond or river. Whenever this bird scurries up and away from New Hampshire’s pebbly lakeshores, it adds to the cheer of any summer’s day.  Its actions have generated names like, “Teeter-tail,” or “Tip-up,” or “The Spotted Tattler.”

The only other freshwater sandpiper we might see locally in mid-May to July is the solitary sandpiper. It is a larger, darker bird and behaves differently. And, as true for most waders in the Northeast, it is just passing through as a migrant on its way to Canadian breeding grounds. You won’t find it nesting down here, and the next time you sight it is on its return journey south to the tropics. With darker, streaked upperparts and a longer bill and blackish legs, it has a tendency to gravely nod its head than teetering up and down.

Peterson said that it may best be described as a dark winged sandpiper with flashy white sides to the tail, which are very conspicuous in flight. It also has a prominent white eye-ring. The solitary sandpiper stands 8-to-9 inches high, and has noticeable white underparts. The bird’s swift, swallow-like flight is buoyant with deep wingbeats.  It also has a graceful habit of holding its wings high over the back—for a moment—just after alighting.

Though fairly numerous, it is usually alone or in pairs in shallow backwaters and pools. The solitary sandpiper may agitate water by trembling the lead foot, presumably to stir up prey, as it gently stalks woodland shores. There, the bird hunts aquatic animals of all sorts, from insects and crustaceans to tadpoles and even small frogs.

I’ve read that when the solitary sandpiper does reach the seclusion of its Canadian and Alaska breeding habitat, this species does an odd thing for sandpipers. It nests in coniferous trees. Preferably in the former nest of a grackle or blackbird—about 40 feet above the ground! Here, its offspring face a formidable challenge, because all sandpiper chicks can leave the nest as soon as they hatch.

Solitary sandpiper chicks have to launch themselves precariously from the nest and flutter their tiny wings frantically as they fall to the forest floor below. Then they follow their parents to nearest shallow water, where they skillfully bob and pack at creatures there in the mud.