Ossipee—May 17, 2021—Two local organizations are partnering in a boater-to-boater communications plan to increase awareness about the regulations that balance recreation and preservation at state-owned Ossipee Lake Natural Area, commonly known as Long Sands.

Effingham-based Green Mountain Conservation Group and Freedom’s Ossipee Lake Alliance said the initiative is in response to the spike in boaters last year as COVID-19 restrictions and lockdowns spread across the region.

Many of the people who flocked to the Natural Area shoreline appeared to be unfamiliar with the state’s mixed-use site regulations, according to the N.H. Division of Forests and Lands, which manages the property. Those regulations maintain 1,000 feet of shoreline for low-impact use by boaters, but prohibit use of the rest of the 400-acre property in order to protect its rare plants and wildlife habitat.

The site’s mixed-use plan is unique in the state. It relies on an honor system among boaters that for years has limited the need for Forest Rangers and Marine Patrol officers to issue tickets for violations. State officials said the influx in boaters last year strained that agreement, prompting the Alliance and Green Mountain to look for a way to reach new boaters.

For that, they turned to Dennis Gould, a long-time lake resident and conservation volunteer.

Gould knows the Natural Area well. In addition to being one of the hundreds of boaters who have rafted there for years, he was a member of the state’s “working group” of lake stakeholders who helped establish the property’s mixed-use management plan.

He said he believes the decline in compliance last year was the result of new boaters not understanding the rules.

“People who have rafted there for generations understand how important the honor system is to keeping part of the shoreline open,” he said. “We have to reach new boaters with that message.”

To do so, he has enlisted volunteer boaters to spread the word. Starting on Memorial Day, they will be at the site and at boat ramps to talk with boaters and distribute a brochure developed with the Alliance and Green Mountain. 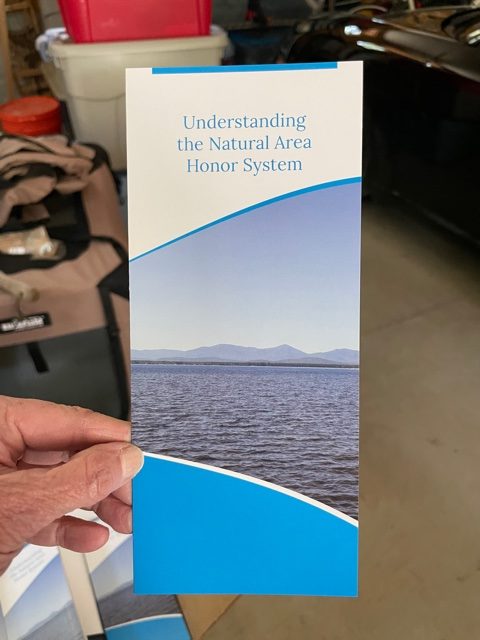 The brochure has a map showing the open and closed sections of the property, and lists the state’s regulations, which include a prohibition against dogs, glass and grills on the shoreline, and a requirement that boats remain floating while anchored. The brochure also reminds boaters that there are no bathrooms at the site.

“I saw how close the state came to closing the shoreline permanently, and that’s a memory I want to share with boaters who are new to the lake,” Gould said.

In 2007 the state closed the Natural Area and threatened to keep it closed after years of uncontrolled recreation had turned it into a public nuisance. Rare plants were severely damaged, and the shoreline was “a minefield with used toilet paper,” as one local official memorably described it.

Officials from the Department of Resources and Economic Development, the state agency in charge of the property at the time, assembled a group of state officials, boaters, and local groups, including Green Mountain and the Alliance, to look at the options. The result was the mixed-use plan, which went into effect in 2009.

“Everyone who helped develop that plan can recall how time-consuming and difficult it was to get consensus on how to balance recreation and preservation,” Ossipee Lake Alliance co-director David Smith said. “But once we got there, we were all confident it could work.”

The boater communications plan is the start of an ongoing initiative built around the Natural Area, according to Matt Howe, executive director of Green Mountain Conservation Group.

“The Natural Area is one of the largest wetlands in the Ossipee watershed,” he noted. “It plays a critical role as a nursery for countless species, and healthy, undisturbed wetlands are essential for natural flood mitigation and protection of our groundwater.”

Patrick Hackley heads the N.H. Division of Forests and Lands, which oversees the property and the ongoing “working group’ of stakeholders. He says the mixed-use plan has helped the site’s rare plant communities recover during the past decade, including last year’s discovery of a plant not previously known to be found there.

“We welcome the local initiative to reach new boaters and appreciate the support of these groups to assist in the stewardship of this globally rare natural area. The outreach effort will help raise awareness of the site’s unique habitat and allow us to keep the area open for the public’s enjoyment,” he said.