Freedom—August 12, 2021—Less than a week after Effingham’s ZBA approved a variance for a new gas station at Boyle’s Market convenience store, a group of local residents met with the Effingham Select Board to ask that the town’s lawyer determine whether the case should be reheard.

Meeting with the select board on Tuesday, Effingham resident Blair Folts, the former executive director of Green Mountain Conservation Group (GMCG), said the select board had a legal responsibility and standing to request a rehearing because gas stations are a prohibited use in the Groundwater Protection District, where the business is located.

Joined by Ossipee resident Richard Fahy and Ossipee Lake Alliance board member Corey Lane, Folts argued that the Groundwater Protection Ordinance denies land uses that may be permitted “by right or allowed by special exception” elsewhere in town if they are expressly prohibited in the Groundwater Protection District. Article 22, Section 2207-A (8) of the ordinance expressly prohibits gas stations in the district.

In an email to ZBA Chairman Theresa Swanick prior to the decision, Town Counsel Matthew Serge confirmed his view that the gas station’s closure in 2015 met the ordinance’s legal definition of “abandonment.” Serge’s email also reminded the board that gas stations are a prohibited use at the site of Boyle’s Market. 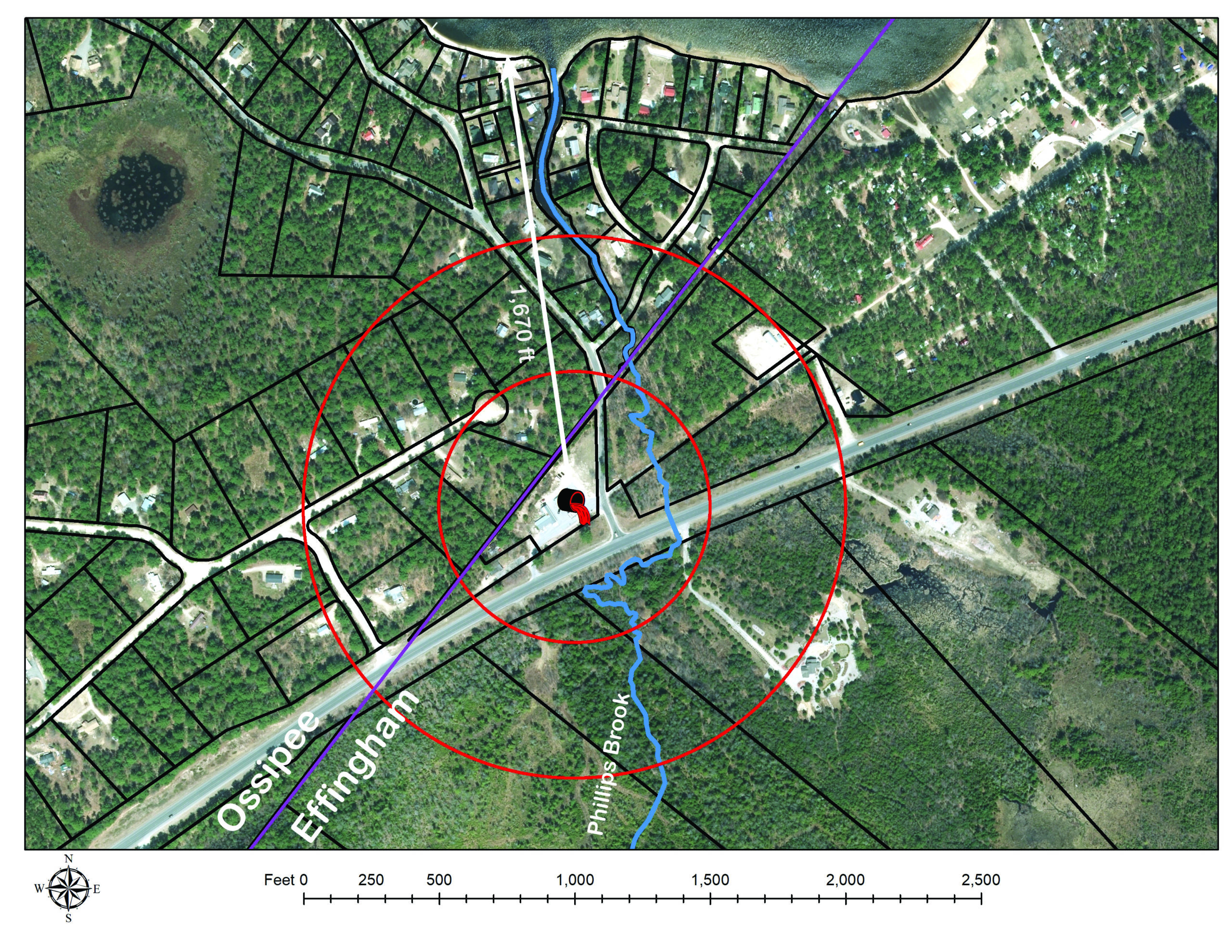 Map shows location of proposed gas station on the Effingham-Ossipee town border. The site is less than 300 feet from Phillips Brook, shown by the blue line, and 1,670 feet from Leavitt Bay. Source: NH Granit GIS.

“At the last hearing on August 4th, the ZBA continued to discuss this property as if it were still a gas station, which it is not,” Folts wrote in a letter the group submitted to the select board.

Folts also reminded the town officials that the applicant installed new underground gas tanks without approval or notice to the Town of Effingham. “This is not legal,” she said.

The group expressed its concern that the ZBA ruled the proposed gas station did not have “regional impact” despite the property being on the border of Effingham and Ossipee. Their concerns about the ruling also included:

“Water does not have borders, and private wells can be contaminated through the ground water and along the stream and lake,” he said.

“In municipalities, residents have public water systems that are routinely tested and water sources like reservoirs are protected. Most citizens in Ossipee have private wells, and they must pay to test their own wells,” he said.

Fahy said water samples must be transported to Concord, and each test for Volatile Organic Chemicals (gasoline toxins) is $120. Add to that the cost of the “standard” water test and the total cost is $205 per test.

“Ossipee and Effingham homeowners will have to pay that cost,” he said as he handed out well test kits to the board.

The group said the select board has the authority to ask for a rehearing in the case because the ZBA should never have permitted the application to go forward.

“Only uses that are permitted can go through the variance process,” Folts said. The ordinance is clear that gas stations are not a permitted use at that site.”

The Select Board said it would consider the matter and discuss their decision at next week’s meeting, at 9 a.m. on August 17.