Editor’s Note: Dave Eastman was a long-time friend and prolific local nature writer. A few years ago, he tapped into his archive of essays and sent us the ones he felt were the most relevant to the Ossipee Lake community. In his memory, we are continuing to post these pieces.

This article originally appeared in the Conway Daily Sun on September 17, 2011.

Both common viburnums widespread to this area with the common name “Wild Raisin” are doing well this year. Perhaps it is a good fruiting year all around. Both shrubs look similar to each other but I rarely find them in the same location. I definitely know that nannyberry is a wet site indicator and is rarely found outside rich, damp ground. Witherod can also be found in drier areas.

Witherod, Viburnum casinoides, is a slender, erect shrub up to l5 feet high that grows in clearings, swamps, moist thickets and also along lakes and stream banks, and other lowlands. It looks good along stone walls embracing an open field. The opposite leaves vary on the same bush as to the small obscure teeth they have, to having only wavy margins which look rubbery to me. The oval leaves appear thick and leathery smooth, and remind me of the Southern Magnolia, though nowhere nearly that big a leaf. You might think at first you’re looking at a young black cherry, but please note the edges are not serrated. 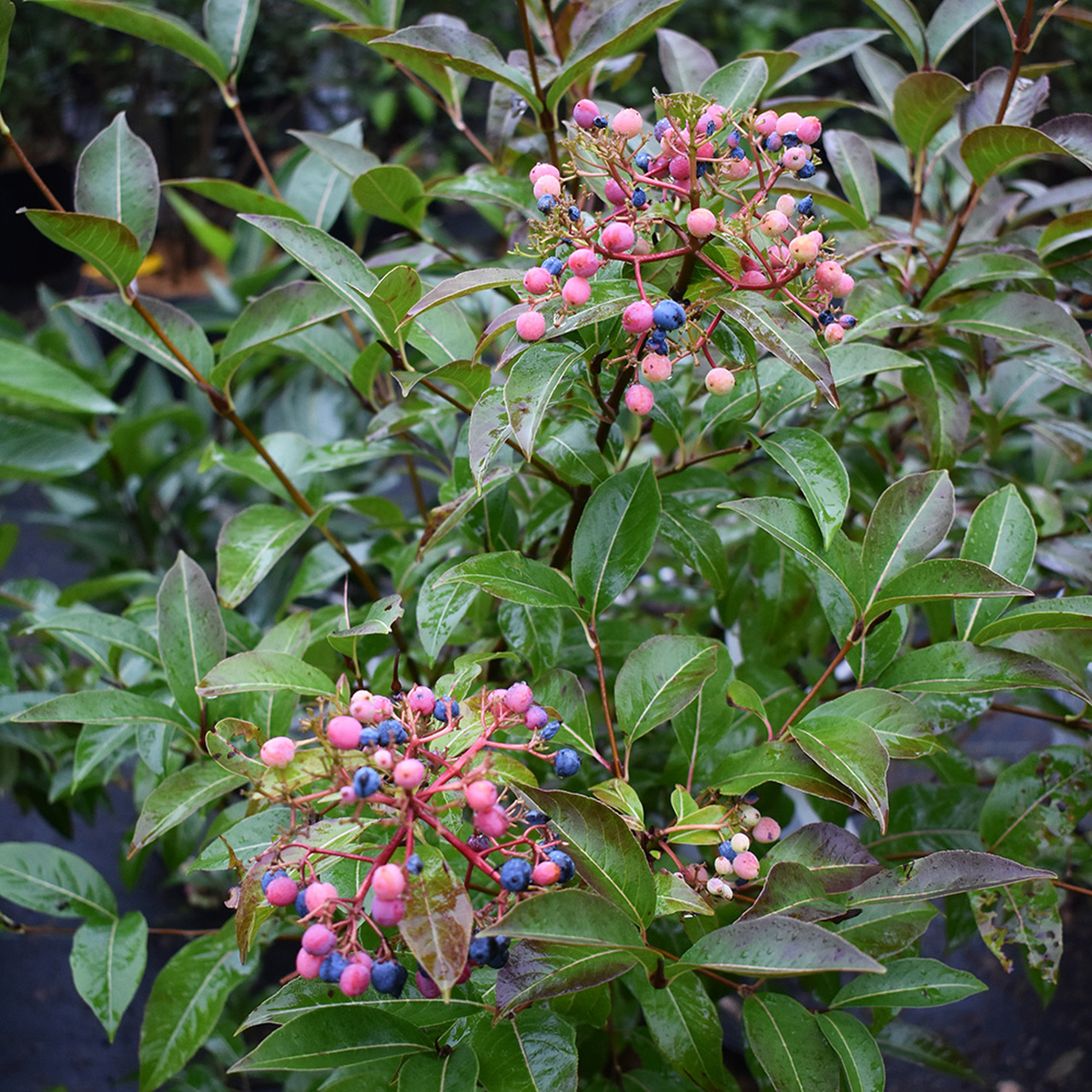 The ill-scented flowers are arranged in dome-shaped clusters about 2-4 inches across. A feathery appearance is given to the flower which blooms in June and July. The immature fruit is a curious bright, light yellow-green at first, attractive to the eye in its own right. Its hue is that of an unripe banana skin.

At the lake’s edge, against the crimson drape of a mountain holly, or with the dark blue fruit of highbush blueberry alongside, witherod’s presence adds to the other shrubs of the natural shoreline such as winterberry in that buffer zone mix. Again, clipping out any competing hardwoods allows the fruits to be clearly seen and visually appreciated, while giving these bird-feeding shrubs complete full sunlight. Their verdant mixture provides a buffer against noise coming across the water from summer recreationists, and creates a visual barrier for privacy, too.

Both of these viburnums change the color of their elliptic fruit as ripening progresses. The light-yellow fruit turns pinkish-red, and finally bluish-black at maturity. Seeing multiple fruits moving through this stage is a colorful delight beyond Labor Day. And incidentally, the unripe fruits contribute to the birds initially being attracted to the plant by their visually detecting the red color, and then eating the blue mature fruit by taste test. Fruit stays on through the fall, and when it dries up, it does look like an old raisin. 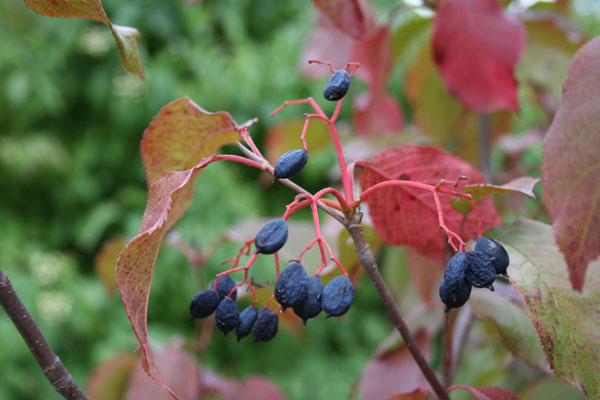 The description “withered raisin” is apt for these viburnums.

The shoreline mix of native shrubs of viburnums, dogwoods, and vacciniums serves as a last filter of nutrients moving towards the lake. As they crave sunlight and can anchor themselves in the thin, rocky shores of New Hampshire, these bushes keep our lakes and ponds clean for both swimming and aquatic life.

Nannyberry can be bought at nurseries as a collected plant. Viburnum lentago differs from witherod by having finely and evenly toothed leaves which abruptly come to a point, which then cutely turn over to one side there. This is a strong field mark for identification. The tall viburnum’s flowers can be very showy in June and literally dominate a roadside or woods border where water often sits. The fragrant white flowers are in clusters 2-5 inches across. Each tiny flower has 5 spreading white petals, 5 white stamens with golden yellow tips, and a green ovary in the center. Nannyberry, Viburnum lentago, is one of the largest viburnums and can grow to 25 feet.

Nannyberry is one of the largest viburnums, growing up to 20 to 25 tall in open sites. Dense stands can occur under optimal conditions; a hedgerow can be observed along route #25 in Tamworth. A hardy plant, it is often planted for streambank stabilization. Nannyberry can spread extensively by root suckering; a huge clump can form a common root system from just a few initial plants. You would want to utilize this fact, and plant this species against a backdrop of tall trees with its dense, oval crowns the way you would accomplish such middle-ground landscaping with mulberry or flowering dogwoods possessing the same height characteristics.

These two shrubs provide valuable food for wildlife over a long period of time because they are able to maintain their position during successional changes in the forest due to their high degree of shade tolerance. You might be surprised where you find them; they are more widespread than one might suspect. They can be spindly in appearance when first discovered. Release them whenever you can and allow songbirds to feed on their fruits in the openings you create. They just need sunshine to produce abundant crops.

Nannyberry, or sheepberry, supposedly obtained its name from being fed to goats as fodder. I don’t know why someone would choose such as preferential forage, and I also still do not know where witherod got its name from.