Ossipee—November 15, 2021—The Mount Washington Valley Rec Path and Ravine Trail in Pine Hill Forest, both in North Conway, aren’t the only community-supported outdoor projects in the valley. At the southern end of Carroll County, the long-established but underused (at least by walkers and hikers) Long Sands Constitution Park is getting a new lease on life, thanks to a determined group of local citizenry.

The park was founded in 1988 when Walter and Estelle White donated the 107 acres of land to establish the park. It’s now home to a soccer field, a baseball field, a dog park, a playground and two miles of trails that lead down to Ossipee Lake, but the trail system was hard to find and needed some love.

Enter a group whose mission is to upgrade and promote the trail system. Thanks to the town’s being named an Age-Friendly Community by the Ossipee Board of Selectmen, the park became eligible for AARP funding, and a grant from that organization made it possible to clear trails, build a kiosk and create a new map of the trail system, something that hadn’t been done in 25 years.

Patricia Pustell, a founding member of the Friends of Constitution Park Ossipee, credited her friend Edwina Boose, who is on the steering committee of the Age-Friendly Communities, with putting Constitution Park on everyone’s radar.

When the pandemic first hit, Edwina Boose and husband, Bob Boose, began walking the trails in the park. “They discovered what a gem it is,” Pustell said.

Boose said she has lived in Ossipee full-time since retiring 20 years ago. “And I never knew there were trails in that park. Once we started using them during the pandemic, we realized they had not been kept up.” She said Ossipee Town Administrator Matt Sawyer gave his blessing to the group going in and grooming the trails, which is what they did last month.

Boose put out a call to members of a weekly walking/hiking group called The Sunflower Pod to help widen the overgrown trails, which total 2 miles and loop down to Ossipee Lake. Kyle Copeland, Tim Otterbach and Eve Klotz were part of that group and pitched in to make signs and build the kiosk.

According to Klotz, “Over the years this facility has been minimally maintained and has had almost no upgrades or improvements done.”

Sixteen years ago, snowmobilers submitted a proposal to the town to allow its members to cross the park, a key stretch of a planned statewide snowmobile trail system.

John Rowe, of the Ossipee Valley Snowmobile Club and Richard Buswell of the Carroll County Coyotes both told selectmen that Carroll County had the potential to rival Coos County in terms of snowmobile habitat, but that there was a void between Ossipee Lake and Wakefield.

According to Boose, the snowmobile trails were successfully added. The dog park was added in 2019 over objections of the select board.

Ossipee Beach is a town project that stirred controversy in November 2005. Bob McDonald, a resident of Long Sands Road (adjacent to the park) opposed a selectmen-backed plan to create the beach, noting “the deplorable conditions of other pet projects (selectmen) have sponsored, such as Constitution Park Beach.”

In a Nov. 17, 2005, story in the Sun, McDonald was quoted as saying “the town does a lousy job taking care of its existing parks,” although then-Selectman Henry Merrow countered that in a recent parks inspection, the state “thought they looked just fine.”

But in 2017, a deal with late lakefront land owner Dianne Sheehan to sell her beach to the town fell through when it barely failed to receive two-thirds of a town vote. Residents who wanted the beach sued the town, saying residents were prevented from voting because the room that accommodated the meeting was too small to allow everyone who wanted to enter from doing so. 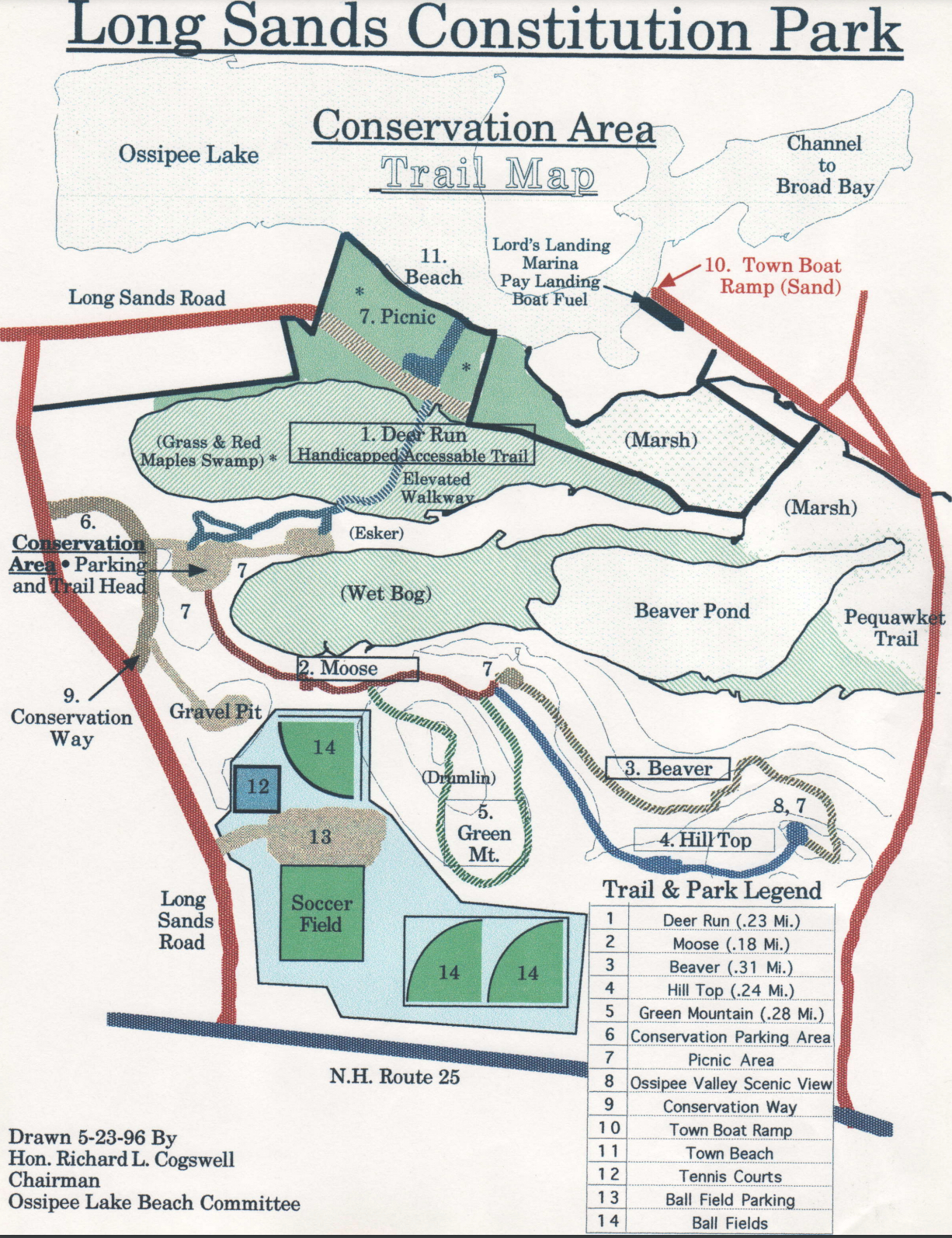 Boose believes that lost opportunity left a bad taste in the mouths of many young residents. Now, new rec director Justin Chaffee hopes to hearten them by getting an article passed at the next town meeting to redo the tennis and pickleball courts, as well as upgrade the ballfields.

Add to this the new and determined group that is stepping up to polish the “gem”: Friends of Constitution Park Ossipee.

They had been planning to hold a Nov. 18 meeting at Hobbs Tavern in Center Ossipee to discuss long-range plans, which could include installing a nine-hole disc golf course next spring.

However, last week, Boose said the meeting has been canceled due to pandemic concerns.

“We have decided that because of the high number of COVID cases in our community, we are postponing out meeting,” she said in an email.

“It has been a difficult decision, but the health and safety of our citizens is too important. However, that does not mean that our work is on hold. We will continue to move forward with long range planning for Constitution Park and would welcome any thoughts and ideas about your dreams for the park.”

“Our hope is that you will get outside and experience the beauty of the walking trails, dog park, playground and other amenities in the park. The dark days of winter can be brighter if you get out and walk, snow shoe, X-country ski and play in Constitution Park. Let us know what you think. Our email is fcpossipee@gmail.com. Our mailing address is P.O. Box 880, Center Ossipee, NH 03814. We will have a Facebook page up and running soon.”