Effingham—April 8, 2022—Effingham’s Planning Board last night voted to send the Meena LLC gas station application to a professional engineering firm to be independently evaluated for its adequacy. The vote was six in favor and one abstention.

Approximately 40 people attended the meeting, with another 35 participating by Zoom.

The vote came in response to a recommendation by the Lakes Region Planning Commission (LRPC), which sent the board a two-page letter as part of the Development of Regional Impact (DRI) process under RSA 36:54:58. LRPC said it was familiar with the location of the proposed development because it helped establish groundwater protections there a decade ago.

In the letter, the Commission noted that Effingham’s ZBA last year required the applicant to provide a Stormwater Management Plan and Spill Prevention Control and Countermeasure Plan as conditions attached to a variance for the applicant to build a gas station in a location where gas stations are prohibited. The plans were submitted, but the application also contained a request that they be waived as requirements.

“Given the sensitive nature of the site of the proposed gas station above the Ossipee Aquifer,” the Commission concluded, “LRPC recommends that the Planning Board seek consulting services to review the adequacy of the applicant’s proposed site plan, Spill Prevention Control and Countermeasure Plan, and Erosion and Stormwater Management Plan.”

The recommendation is consistent with one made more than a month ago by the attorney for Ossipee residents abutting the development, and two conservation organizations, Ossipee Lake Alliance and Green Mountain Conservation. Collectively they are appealing the ZBA variance approval in state court.

The adequacy of the application, which was prepared by Meena’s agent, contractor and State Representative Mark McConkey, has been the subject of discussion among a number of the towns designated as being impacted by the development. Towns including Eaton, Tamworth and Freedom have exercised their DRI abutter rights to either question or oppose the application as inadequate.

Planning Board Chair Theresa Swanick offered time for abutters who are newly enfranchised through the DRI process to speak, and the board heard from several of them, including Freedom Conservation Commission Chair Jeff Nicoll. 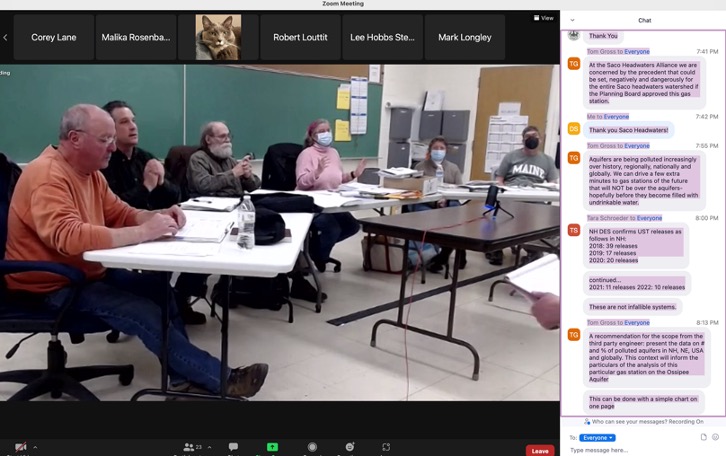 Quoting from the Freedom Select Board’s 10-page letter to Effingham on the matter, he said “the specific characteristics of the land at this location and its history as a gravel pit are particularly problematic,” adding that the Stormwater Management Plan was “inadequate.”

Andy Yale of Parsonsfield’s Planning Board asked Swanick about a waiver request for McConkey in the credentials section of the application, a request not explained in the document. Swanick responded that the board had not granted any waiver requests, including that one.

Also speaking was Ossipee abutter Tammy McPherson, who said she wanted to know who would be paying for semi-annual water tests to ensure wells aren’t contaminated if the development is approved.

Billie Lunt, who owns property near the site in Ossipee and Effingham, attended with her 15-year-old daughter, Stella, who said she was there representing future generations of people who plan to live in the area. Her mother, Billie, began her short presentation by thanking the Effingham board for the opportunity to speak, saying Ossipee officials had recently endorsed the gas station without holding a public hearing about it.

In addition to speaking about the application, Lunt said she was concerned that no one had required the applicant to explain what was done with the potentially contaminated soil removed from the property when the owner illegally started building the gas station a year ago. The work was stopped by a cease-and-desist order, which remains in place.

The hearing on the gas station was tentatively continued to May 5.