Ossipee—March 15, 2022—Each year, like clockwork, a group of long-time Ossipee Lake boaters plans a meet-up to spruce-up the public section of shoreline at state-owned Ossipee Lake Natural Area, which is at the southern end of the big lake.

This year’s event took place on Saturday, when volunteers from all parts of the lake system arrived by boat with rakes and trash bags, ultimately removing 20 bags of debris from the site, and moving smaller branches and brush away from the beach area to decompose naturally. 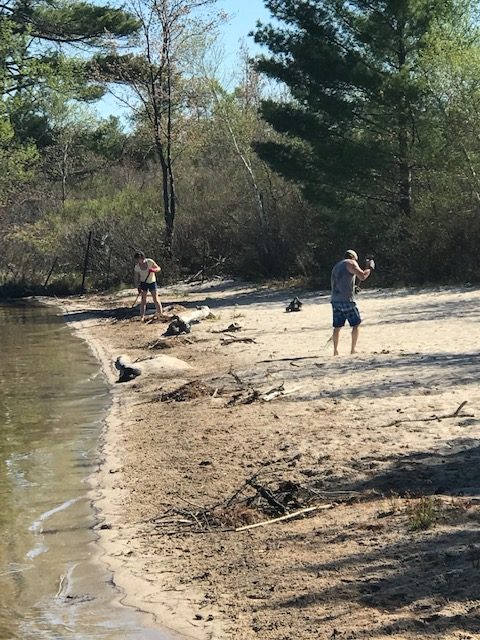 “The beach looks good and ready for summer,” said Dennis Gould, who has organized the clean-up for years.

While 14 volunteers worked at the site, boaters Richard Lover and John MacDonald waited at Lakefront Landing with Lover’s truck, then transported the debris to Ossipee’s town dump, an arrangement made with Town Administrator Matt Sawyer, who has lauded the volunteers’ annual effort.

The Natural Area shoreline has been a magnet for boaters since the 1940s, when it was owned by land developers. They sold it to the state in 1969, at around the same time that biologists, wildlife experts and archeologists began reporting on the site’s unique environmental and cultural value.

Years of state neglect and damage by recreation were stemmed by a 2009 site management plan that largely relies on boater-to-boater influencing to help keep recreation on the public part of the shoreline and away from the rest of the property so it can recover.

Last year, Gould, with the help of Ossipee Lake Alliance and Green Mountain Conservation Group, led a renewed push for boater education after the pandemic created a spike in boaters unfamiliar with the site’s regulations.

A new boater-to-boater pamphlet, a large poster at the Route 25 boat ramp and a video about the site were some of the components of the initiative, which Gould said will continue this season.

The site is overseen by the N.H. Division of Natural and Cultural Resources (DNCR), which is responsible for, among other things, signage and installing fencing annually to separate the open portion of shoreline from the closed section.

The boater-volunteers and Ossipee Lake Alliance have repeatedly pressed the state to make their on-site signs easier to read and understand, and to provide more durable fencing. Changes promised for last season did not occur.

DNCR revealed a new design for its signs in April, but said it was not yet official, and a timeline for producing them had not yet been set. On Saturday, Gould said the fencing has not yet been installed for the new season.