Freedom—June 2, 2022—It started with a post by Mark V. on the Facebook group “I Boat on Ossipee Lake.”

After watching an unleashed dog defecate on the beach at Ossipee Lake Natural Area, he offered the owner a plastic bag for a clean-up. The owner declined and tossed the mess into the woods.

“If you bring a dog, and I love dogs, please clean up after them, make it nice for all of us,” Mark wrote, prompting 84 likes—and 97 comments. The comments quickly turned ugly.

Writing in all-caps, Marie S. offered “NH LIVE FREE OR DIE GET OVER IT DOGS ARE FREE TOO,” prompting push-back from those favoring a more public-spirited approach to pet responsibility.

Unpersuaded, Marie fired back: “My dog will be on that beach and not leashed as it has been since 1976 if you don’t like it move to another beach,” she wrote.

“Just because you have moved here recently doesn’t mean you change what has been,” she added, calling her critics “narrow minded elitists.”

While it’s likely a majority of boaters support the idea of keeping dogs on a leash and cleaning up after them, there has been confusion about dogs at the Natural Area for years. Now the issue has been cleared-up: State regulations prohibit dogs from being on the property, leashed or unleashed. 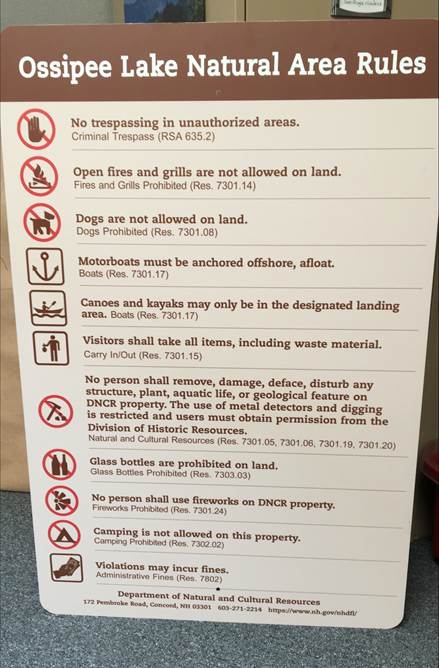 The prohibition has been on the books since the Natural Area management plan went into effect in 2009. But what was clear then became murky over time as state enforcement efforts lagged, and boater-to-boater communication—the glue that holds the property management plan together—petered-out.

Last year, Ossipee Lake Alliance and Green Mountain Conservation Group helped revive the boater communications plan with Dennis Gould, a long-time volunteer who years ago worked with the two non-profits to secure the state’s commitment to keep part of the environmentally fragile, culturally-significant property open for recreation, a traditional use going back decades.

In exchange, Gould and others from the boating community agreed to be influencers to steer boaters away from the closed sections of the property, and to abide by the state’s site regulations.

But the prohibition against dogs has always been a source of confusion. It’s in the 2009 property management plan, and was in an early version of a boater education pamphlet. But it was never listed on the state signs that dotted the site, all of which contained generic information pertaining to state properties that bear no resemblance to the unique situation at the Natural Area.

Now the Division of Natural and Cultural Resources (DNCR), the successor to the state agency DRED, has posted newly-designed signs with a list of site-specific regulations that are clearly—and succinctly—written. The list includes “Dogs are not allowed on land.”

Additionally, motorboats must remain anchored offshore, canoes and kayaks must land only in the marked landing area, and boaters need to stay within the designated recreation area. Glass containers, fires and camping are prohibited.

State enforcement consists of Marine Patrol and Forest Ranger visits, the latter aided by a new boat this year. Monitoring is also accomplished through electronic means. Violators are subject to being fined, and the property’s management plan states the ultimate outcome in the event of widespread non-compliance:

“DNCR will end public access if public use consistently or egregiously violates posted rules, resulting in: 1) the loss of threatened and endangered plants or exemplary natural communities, or 2) destruction of historic resources and interference with efforts to reconstruct the historical record, or 3) an unclean, unsafe environment.”

Volunteer boater Dennis Gould last week installed plastic containers at the site to hold the boater information pamphlet and make it easy to obtain one. Pamphlets are also available at marinas and boat ramps, and are hand-distributed to boaters by volunteers as needed.

In a Facebook post, Gould said he hopes boaters will consider what he and his fellow volunteers are trying to accomplish by keeping the area clean and educating the public.

“I urge all my fellow boaters to please respect the limited rules so all of us can continue to enjoy Long Sands,” he posted, using the short-hand name for the site.

Ossipee Lake Alliance co-founder David Smith pointed to the years of work that went into securing the agreement to keep part of the shore open for recreation, involving dozens of lake stakeholders.

“At the start of the process, boaters and conservationists were shouting at one another. But in the end, we made state history with a unique win-win solution,” he said. “Many new boaters may not be aware of how much it took to get to where we are today.”