Effingham—July 19, 2022—After spending more than two months addressing errors and omissions in its plans for a gas station in Effingham’s Groundwater Protection District, Meena LLC was caught up short on July 7 after its revised materials were found to be flawed by independent consulting firm North Point Engineering.

A planned presentation to the town was hastily scrapped, and a new date for a hearing remains uncertain as the Planning Board juggles the schedules of its members and the attorneys representing competing interests in the matter.

Meena’s new materials, prepared by Horizons Engineering, include substantive changes and additions to the Stormwater Management Plan and the Spill Prevention, Control and Countermeasures Plan prepared more than a year ago by local septic system contractor Mark McConkey. The McConkey plans were reviewed unfavorably by North Point in April.

In its review of the new Horizons material, North Point bulleted 14 issues requiring changes or explanations. North Point said it “assumed” the new Stormwater Management Plan is intended to replace McConkey’s stormwater plan, but said it was unclear if Meena intended to keep McConkey’s Site Plan as part of the application.

“The McConkey Site Plan contains references to grading and drainage design, including the previously proposed paved swale in the driveway,” the report stated. “It should be revised accordingly or a separate Site Plan should be prepared.”

Whereas McConkey’s stormwater plan contemplated runoff “sheeting” onto abutting DOT property and into an infiltration basin that flows under Leavitt Road toward Phillips Brook, the Horizons proposal envisions a closed runoff collection system.

Runoff from the gas pump island and petroleum storage area will drain into one of three catch basins and flow to an oil/water separator, an underground storage structure designed to capture course sediments and floating debris. From there it will enter a “level spreader” that will disperse the runoff.

Ultimately, the runoff will end up in the same DOT infiltration basin cited in the McConkey plan, and that presents complications. 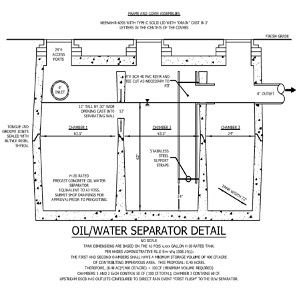 Industry standard design criteria for stormwater management differentiates between “pre-treatment,” essentially collecting course sediments, and “primary treatment,” which minimizes the potential that pollutants will infiltrate surface waters and groundwater, a particular issue with the Meena property, a former gravel pit comprised of highly transmissive soils over the Ossipee Aquifer.

In its report, North Point said Meena’s plan appears to meet pre-treatment industry standards, but said it “is not evident” how the design intends to meet the primary treatment standards.

“It does not appear that there is adequate separation to groundwater based on the test pit data and the presence of wetlands…[and] it would appear to us that the onsite runoff should be fully treated prior to being discharged to the DOT right-of-way.”

The consulting firm recommended that the entire stormwater treatment plan be described in narrative form, and that the narrative “identify the area of the site that is draining to this stormwater system and provide an appropriate analysis of each treatment device.”

North Point also stated that Meena will require a permit or formal agreement with DOT to use state property in the manner described, as well as an agreement about the long-term maintenance of the drainage structures, some of which are on state land. Neither is contained in the revised Meena documents submitted to the Planning Board on June 30.

The presence of wetlands on the DOT property presents a further challenge. None of the four Site Plan Applications submitted by Meena agent McConkey between March and December last year showed wetlands on the state property. The new materials created by Horizons do.

That means the Site Plan Application must be revised to specify how the applicant’s proposed stormwater management practices will comply with the town’s Wetlands Ordinance.

“We recommend that the Existing Conditions Plan clarify the edge of wetlands that are shown in the DOT right-of-way,” the North Point report stated, asking whether the wetlands were delineated by a certified wetland scientist.

More than 650 signatures from the nine Development of Regional Impact communities were to be presented to the Planning Board on July 7. Given the postponement of the hearing, the two organizations are continuing the petition effort.