Effingham—August 23, 2022—At least 65 people packed Effingham Town Hall, with another 50 on Zoom, to attend Monday night’s Special Hearing on Meena LLC’s Development of Regional Impact for a gas station in the Groundwater Protection District.

What they got instead was a “business meeting,” as Planning Board Chair Theresa Swanick described it, during which board members discussed and voted on a legal question that has been pending since early April, and then voted to continue the Meena matter to October 6.

No public input was permitted, but there was discussion nonetheless.

As the over-capacity crowd strained to hear and grasp what was happening, tempers flared when it became evident that the Site Plan Application would not be discussed by the applicant or anyone else because new materials had been submitted at the last minute.

Board Chair Swanick became visibly irritated by requests for points of order to clarify the confusion and, in several cases, to challenge board members on alleged misstatements. 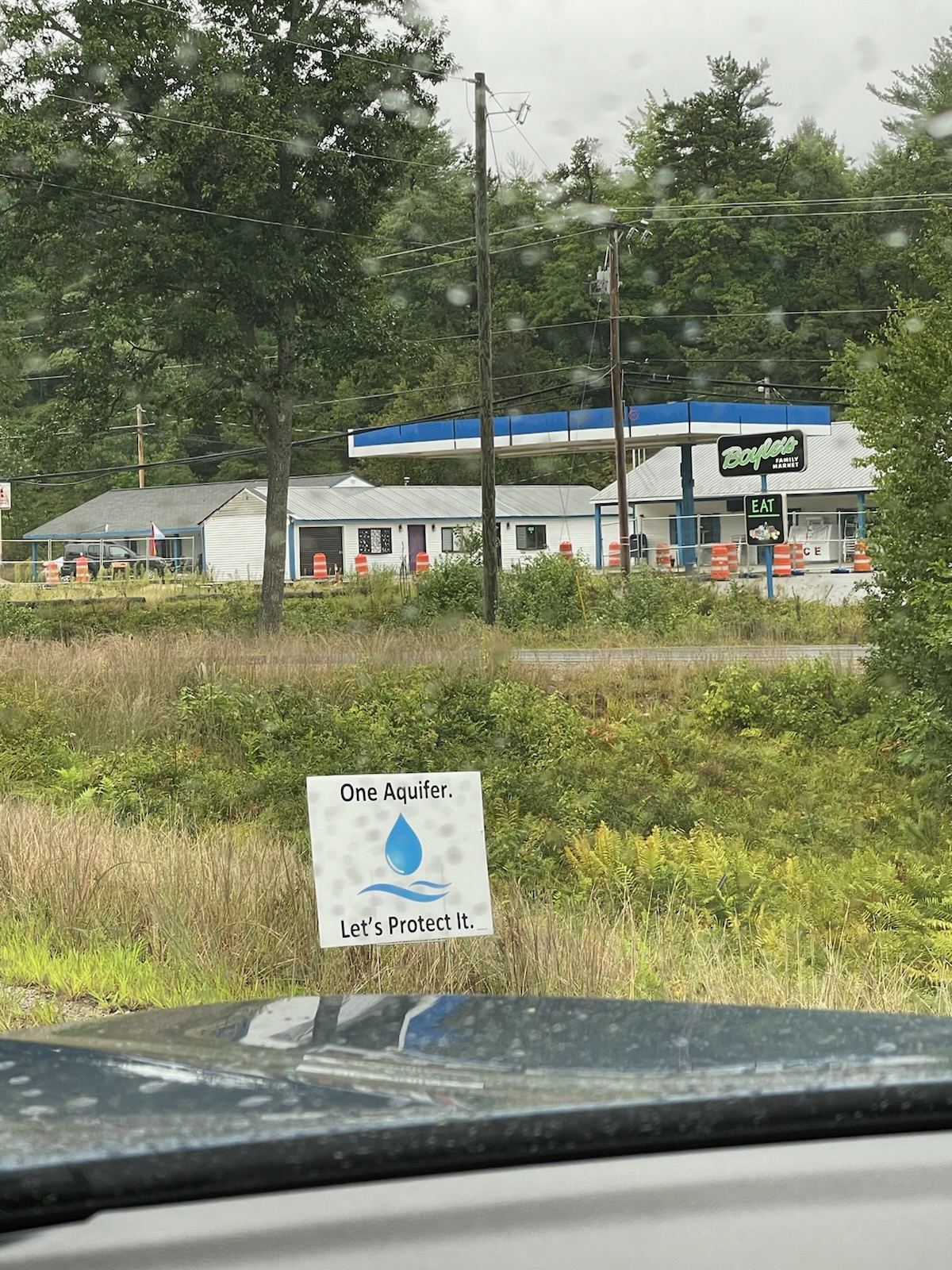 Aquifer protection signs created by Green Mountain Conservation Group have started appearing around the area, including this one next to DOT property where Meena wants to pump gas station runoff. Contributed Photo

Asked by Ossipee resident Perry Fine about potential testimony by Ossipee Aquifer expert Dr. Robert Newton, whom Meena claims has “no standing to be heard regarding any aspects of this case,” Swanick said the board is familiar with Newton’s position on the application.

“If you had sent me two letters and I had watched a half hour video of you and your thoughts on a subject, I wouldn’t think that after those two letters and watching your video that I would need you to come and do a presentation for me,” she said, according to an audio recording of the meeting.

After Fine attempted to clarify his point of order question, Swanick interrupted, loudly saying “Excuse me” and twice slapping her hand hard on the table to audible gasps from the room. “I’m the chair,” she said.

“But not the czar,” Fine responded to laughter from the crowd.

Zoom participants could hear the exchange but not see it, a technical issue that also plagued the board’s hearing on July 7, which similarly ended without a discussion of the Site Plan Application, the purpose of the meeting.

The reason in both cases was a delay in Meena’s timely submission of materials so that the board and its consultant, North Point Engineering, could review them before the meeting.

Meena delivered new materials late Friday afternoon with an apology from its attorney, who said he thought they had already been submitted. The materials were made available to the public on Monday at 2 p.m., approximately four hours before the meeting began.

The single issue discussed by the board Monday night was whether Meena needs to apply for a Special Use Permit under Article 22 of the Zoning Ordinance, which pertains to the handling and use of regulated substances in quantities exceeding 100 gallons in areas of groundwater protection.

In its initial review of the plan, consulting firm North Point Engineering identified the lack of a permit as a deficiency, but was rebutted by Meena’s attorney, who called their conclusion “legally incorrect.” North Point subsequently reiterated its opinion and recommended that the Planning Board discuss it with Town Counsel.

After a brief discussion Monday night, the board voted unanimously that the permit was not needed. Asked by Ossipee Lake Alliance in an email whether Town Counsel had rendered an opinion prior to the board’s vote, Board Chair Swanick did not reply.

A later point of order about Dr. Newton by Ossipee Resident Tim Otterbach yielded Swanick’s agreement that the board would accept information from the Madison resident provided that it is new information and is submitted by September 9, which is also the deadline for additional materials from Meena.

Critical Comments
Public comments critical of the meeting—online, on the Zoom dashboard, and as the audience filed out of Town Hall—focused more on the way the meeting was conducted than on the frustrating technical problems.

“This was a pretty difficult experience on the Zoom side of things,” wrote Knute Ogren, Colin Sheehan and Pete Schiller in a group post. From Sue Avery, also on Zoom, “The board didn’t report on letters;” and from Mahra Teikmanis came a plea during the meeting that the board “Identify all speakers please for the benefit of the public,” a request that went unheeded.

“This material bs has happened at EVERY meeting,” posted Edwina Boose. “If not received, do not accept! It is always sent the DAY of the meeting and the board members have ‘not had time’ to review. Enough! How many motions to continue is this board going to do?”

Board Chair Swanick personally took direct hits from attendees, with Rich Fahy and James Misercola, among others, calling her demeanor “rude,” and Bryant G writing that the meeting was a “Perfect example of why politics at every level needs to be changed.”

From Linda Taylor: “I have never heard something so chaotic in all my years of being involved with addressing community issues,” adding that she was “discouraged and disgusted.”

“A circus,” concluded Susan Wiley in an email.

Speaking, he said, on behalf of those who had come “from all over the county” to attend the meeting, Mark Longley expressed his disappointment that Swanick didn’t “berate” the Meena legal team for again submitting materials late, and at the last minute.