Effingham—August 9, 2022—Opposition to building a gas station in the Groundwater Protection District continued to grow last week as Effingham’s Planning Board scheduled a special hearing on the matter.

Reviewing Meena LLC’s Site Plan Application will be the only item on the agenda when the board convenes on Monday, August 22, in Town Hall at 6:30 p.m., according to Board Chair Theresa Swanick.

The date and single topic focus accommodates requests made by the attorneys representing the applicant and opponents of the plan.

The board’s Site Plan Application review was scheduled to start on February 3, but has been repeatedly delayed for procedural reasons, and to facilitate rewrites of the plan based on independent professional reviews by the board’s technical consultant, North Point Engineering.

While the board was setting the hearing date, local lake organization Broad and Leavitt Bay Association (BLBA) and Concord-based American Groundwater Trust became the latest organizations to go public with their concerns about the “Development of Regional Impact” affecting nine communities in New Hampshire and Maine.

At its annual meeting, BLBA, whose 175 property owners make it the largest place-based organization on Ossipee Lake, voted unanimously to oppose the gas station as a threat to the area’s drinking water. 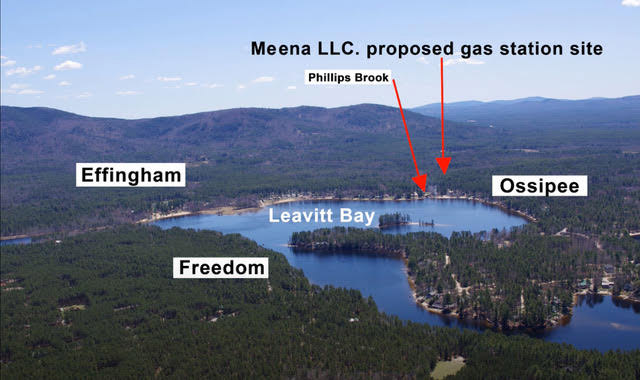 Screen grab from a video produced in June by the Alliance and Green Mountain Conservation Group shows the proposed gas station location relative to the lake.

Their letter to the Planning Board cited published data about the site’s unique hydrology and proximity to the Ossipee Aquifer, and noted that Broad Bay and Leavitt Bay have more than 300 private wells for which there is no regular testing for VOCs and other contaminants which could enter the groundwater at the Meena LLC site and migrate to residential and commercial wells.

Well contamination could go undetected without regular testing, the letter stated, placing residents at risk for long term health effects. The letter referenced the struggles of residents in near-by Fryeburg, Maine, where a municipal water supply well serving hundreds of customers was shut down after tests showed the presence of contaminants.

“Show your support for the citizenship in your town, your surrounding towns, your state and surrounding states.”

Copeland said a copy of the letter was sent to the Ossipee Select Board, as many of the lake organization’s members are Ossipee taxpayers. In April, Ossipee Select Board Chair Jonathan Smith issued a qualified “endorsement” of the gas station plan, which is on Ossipee’s town border. Other Ossipee boards followed suit.

At American Ground Water Trust, Executive Director Andrew Stone said he felt so strongly about the issue he decided to write a follow-up letter to one he sent to the Planning Board in April, since “It seems the issue has not yet been resolved.”

Stone, whose Concord-based organization focuses on the protection and sustainability of groundwater resources nationally, said three out of five New Hampshire residents rely on private wells for their drinking water, making it a key factor in his concern about the Meena LLC site.

“Once an aquifer source is contaminated, it is a permanent loss of essential environmental and economic inventory,” he wrote.

“The Ossipee Aquifer can’t move. A gas station can be sited in a different place,” he concluded.

More than 65 letters have been received by the Planning Board from individuals and non-profit organizations, including N.H. Lakes, Northern Forest Resources, Saco River Corridor Commission, and the Society for the Protection of New Hampshire Forests, the latter of which said “the protection of water supply lands and important aquatic resources…should be paramount for organizations, municipalities and state agencies.”

The Town of Freedom and Tamworth’s Planning Board have written letters opposing the plan, and elected municipal officials in Parsonsfield, Eaton, Effingham, Tamworth and Sandwich have submitted their concerns about the development’s threat to drinking water.

A recent petition to the Planning Board signed by more than 660 people also reflected a wide geographic spread. It asked the board to have North Point Engineering review the entire Meena LLC Site Plan Application rather than just parts of it.

On April 7 the board voted to hire North Point to evaluate “the application and all materials submitted,” according to the meeting minutes. Without explanation, however, the review was limited to two parts of the document, according to North Point’s initial report.

The Planning Board has not yet ruled on the petition, and a majority of the Site Plan Application remains unreviewed by an independent third-party.