Effingham—August 16, 2022—In advance of a special August 22 hearing in Effingham, two State Representatives last week sent letters to the N.H. Department of Transportation (DOT) asking that Meena LLC’s proposed use of State property for gas station runoff be denied.

In separate letters to Commissioner Victoria Sheehan, Carroll 8 State Representative Bill Marsh and Carroll 3 State Representative Jerry Knirk said there is possibility that DOT and the State of New Hampshire could share in liability if petroleum contaminants enter the Ossipee Aquifer from State land.

Meena’s Stormwater Management Plan proposes to funnel gas station runoff to sumps and related equipment it would install on State property. The runoff—an estimated 800,000 gallons annually—would terminate in a DOT infiltration basin at the base of the property next to Route 25 and Leavitt Road. 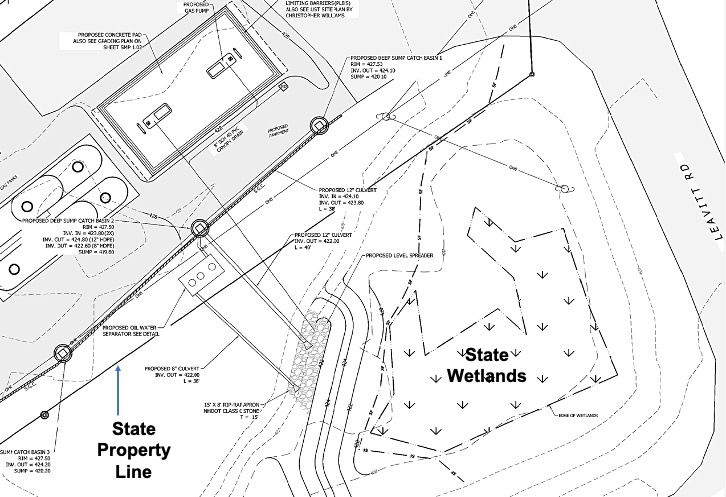 The State property, like the Meena LLC property, is highly transmissive, and the base of the infiltration basin is just above the water table, meaning there is a high risk that contaminants could enter the groundwater to pollute near-by wells and the Ossipee Aquifer itself.

“Given that the aquifer is the primary source of drinking water for 14 communities, the potential liability and cost to NH taxpayers were this aquifer to become contaminated would be massive,” Marsh wrote in his letter.

Discussions between the Conway company’s agents and DOT about using the State property for runoff have taken place since at least March, according to emails submitted by the applicant to the Planning Board.

In a letter to Effingham’s Planning Board, the abutters’ attorney said the revised drainage plan violates Sections 1604 and 1605 of the Town’s Wetlands Ordinance, which requires a minimum 25 ft. buffer for the State’s wetlands. 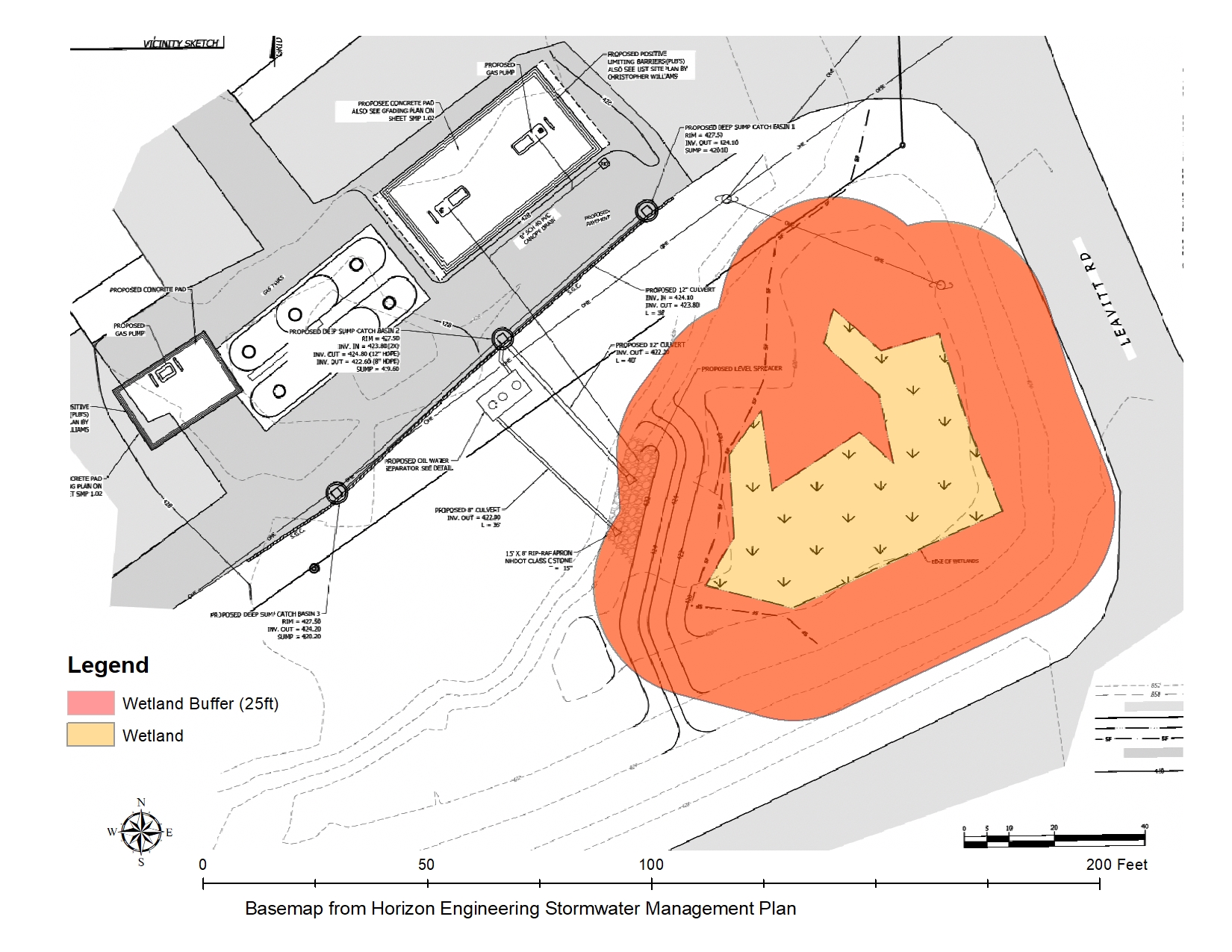 Buffers, which are integral to protecting drinking water, are required to reduce disturbances to wetlands caused by human activity, including the effects of stormwater runoff.

“Scaling the buffer around the infiltration basin wetlands appears to show the sump and oil-water separator outlet pipes, level spreader and approximately four-foot-high berm to all be located in the wetlands buffer area,” the attorney wrote.

In addition, the abutters’ attorney said the plan violates Section 1607C of the Ordinance.

“The proposed discharge into the DOT right-of-way, and the use of a level spreader to discharge [runoff] toward the infiltration basin, is an alteration of the flow of water,” which is prohibited by the Ordinance.

The Planning Board’s consultant, North Point Engineering, noted that wetlands shown in the new document were not shown in previous versions of the plan written by Meena LLC agent Mark McConkey.

Geoscientist Dr. Robert Newton, a critic of the gas station proposal, also took notice of the wetlands. After using GIS mapping to identify the required buffer zone for the DOT wetlands, Newton said he realized the plan would also intrude on the buffer zone of a second tract of wetlands.

That buffer is for a 283-acre parcel of privately-owned “Exemplary Wetlands” adjacent to Route 25. Exemplary Wetlands, which are critical to protecting drinking water, preventing floods and other vital environmental functions, require a 150 ft. protective buffer, which puts the DOT’s infiltration basin inside the restricted zone. 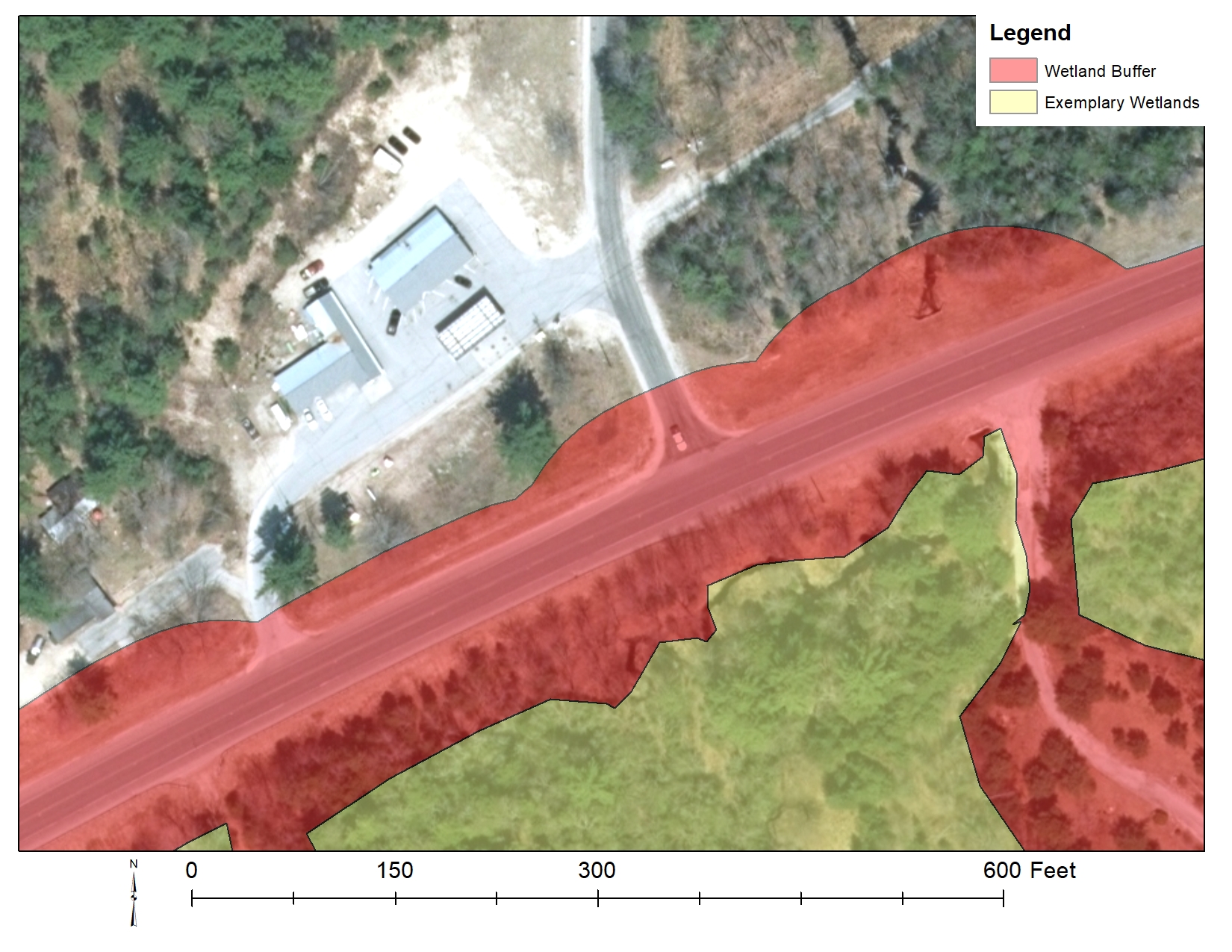 The required 150 ft. buffer for a 283-acre parcel of Exemplary Wetlands encompasses the DOT infiltration basin at the foot of the property adjacent to Route 25 and Leavitt Road. Source: Dr. Robert Newton

A Growing List of Challenges
The legal challenge to the use of State land for gas station runoff is in addition to a number of other roadblocks that Meena faces, including complying with a State regulation that new Underground Gasoline Storage Tanks (USTs) be “at least 500 feet” away from Public Water Supply wells.

Meena’s USTs, which were illegally installed last year without building permits or site plan approval, are estimated to be 180-200 feet from a Public Water Supply well that serves the business.

Opponents of the gas station say there is no place on the Meena property that a well can be located to meet the regulation. In an email exchange with Dr. Newton last fall, DES official Charlie Krautmann said it is up to the Planning Board to address the well issue.

Also requiring Planning Board resolution is the question of whether Meena must apply for a Special Use Permit in regard to the “storage, handling and use of regulated substances in quantities exceeding 100 gallons.”

Recommended by the board’s consultant, North Point Engineering, per Section 22 of the Zoning Ordinance, a Special Use Permit would require Meena to meet a set of defined Performance Standards, many of which pertain to Stormwater Management.

Meena’s attorney argued to the board that North Point was “legally incorrect” in its determination, but said his client would voluntarily “recognize” the Performance Standards “to the extent applicable to its project.”

The attorney for Meena’s abutters said only a binding Special Use Permit would provide a way for the town to determine Meena’s compliance with the required Performance Standards.

A special public hearing on the Meena gas station application is scheduled for Monday, August 22, at 6:30 p.m. in Effingham Town Hall. A Zoom link option will be posted on the town website or may be requested at pb.admin@effinghamnh.net.