From the Conway Daily Sun

Effingham—October 3, 2022— Fifteen thousand years ago, the site of the former Boyle’s Family Market likely sat on a steep slope under an ancient lake formed by a retreating glacier.

That makes the location along Route 25 a particularly bad spot to put a gas station, according to Smith College Professor Emeritus of Geoscience Robert Newton, who is also the former director of Smith College Center for the Environment, Ecological Design and Sustainability.

On Sept. 29, Newton delivered a talk, “Protecting the Ossipee Aquifer: The Dangers of a Proposed Gas Station on Route 25 and Other Threats” to about two dozen people at Runnells Hall in Chocorua and another 29 people who watched remotely on Zoom.

“The take-home message here is once contamination is in the groundwater system, it’s hard to get it out. It travels a long way, and it takes a long time to do it,” said Newton, adding it could take decades to discover any pollutants and that the solutions are “expensive.”

The proposed new gas station would be located just south of Leavitt Bay and southeast of Ossipee Lake. For over a year, Meena LLC of Conway has been trying to get approved to make the former Boyle’s Market site a gas station.

The Ossipee Aquifer is among the largest stratified drift aquifers in New Hampshire, maps show. The gist of Newton’s analysis is that water flows from high elevations to low and the slope of the land where the proposed gas station would be helps feed the Ossipee Aquifer because it’s made of loosely packed sand and gravel. Areas made of tighter packed gravel/clay don’t absorb water as easily.

“Stratified drift is just a fancy term for sand and gravel,” Newton told his listeners, explaining that the slope of loosely packed sand and gravel was formed by a retreating glacier.

“As you can imagine, this is very permeable material. And so when it rains, the water just infiltrates directly down into the ground and then moves through the system as groundwater,” he said.

This means that if gas were to spill from the tanks, it would each the groundwater table quickly and then move throughout the aquifer and into the lake. 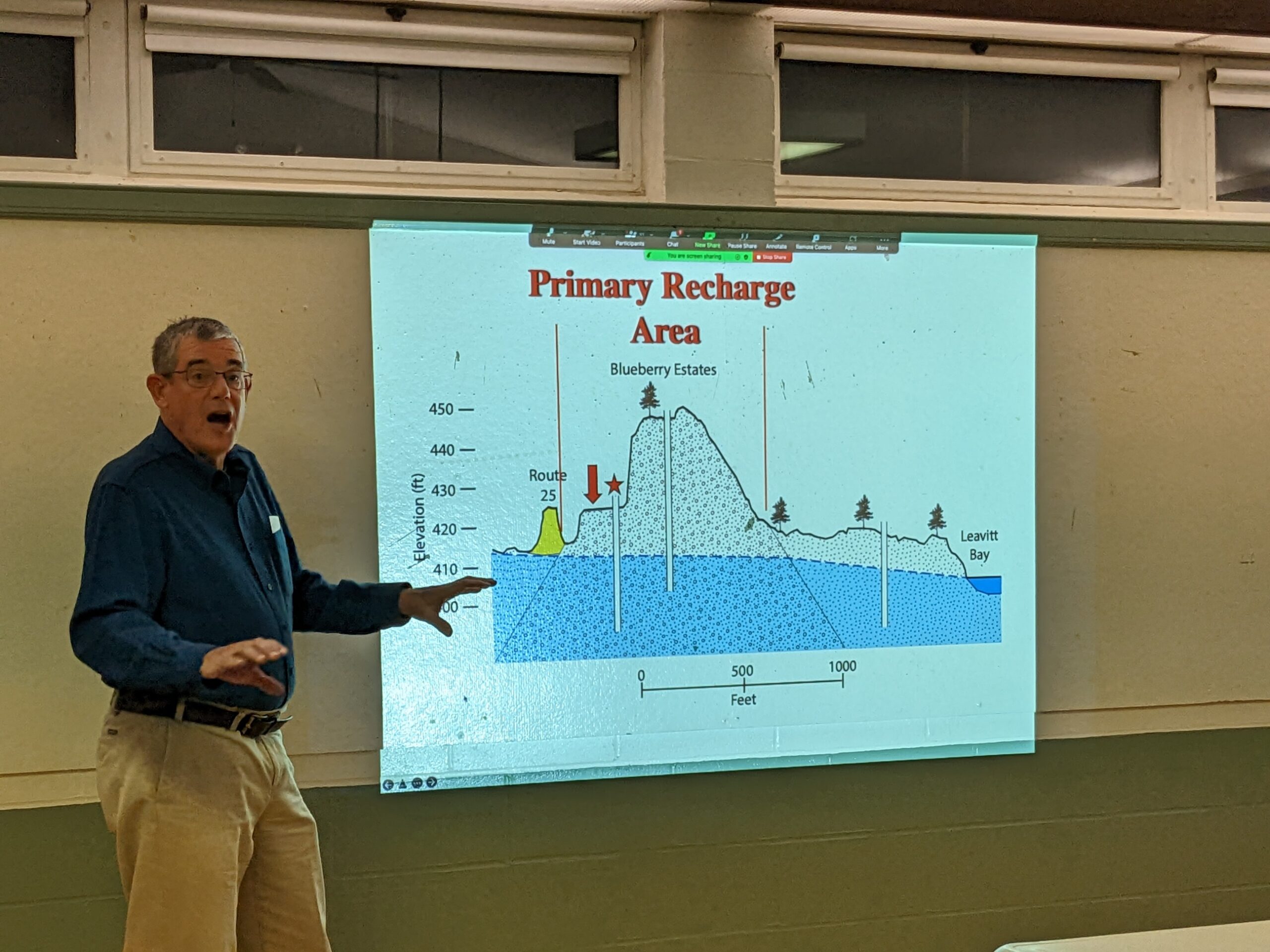 “It (spilled gas) is going to end up here,” said Newton, pointing to Ossipee Lake. “Groundwater goes from high flows from high areas of recharge to low areas of discharge.”

For example, a spill in the “recharge” area of the aquifer would be more serious than a spill near a river, “a discharge area,” he said.

Newton said some rivers are also fed by groundwater that pushes toward the surface, so in case of a spill, the gas would be carried away and be less likely to seep into the ground.

“If you had the same spill up here, in the area of recharge, it would be a much more devastating thing because it would go down and then start moving through the whole system,” said Newton. “So, recharge areas are much more important than discharge.”

According to Newton’s reading of the geology, the groundwater near the proposed gas station naturally flows north toward the lake and numerous residences between the lake and the gas station.

Not only that, but layers of aggregate were stripped off by a gravel pit so there’s less buffer between the surface and the groundwater in that location. Newton didn’t know when the site was an active pit.

He also said that residential wells would likely draw the gas to them, though again it could take years for the pollution to be discovered.
“So the message is contamination — once it’s in the aquifer — takes a long time to move through,” said Newton.

Newton spoke at length about the Barnes Aquifer in Western Massachusetts as a cautionary tale of what can happen when an aquifer is polluted. Newton has been a member of the Barnes Aquifer Protection Advisory Committee for over 20 years. Area towns like East Hampton and Westfield, Mass., don’t allow private wells because of trichloroethylene pollution from a Holyoke, Mass., transformer plant back in the 1950s. Plant workers dumped a degreaser in gravel pits nearby, and the pollution spread for decades.

“That was done the ’50s. It wasn’t till the ’80s, that we found it up here, like five miles away,” said Newton pointing to a map. He said there have been a number of spills in Carroll County over the years.

For example, 20 gallons of gasoline in Moultonborough once caused a spill because someone drove off with a pump hose still in their gas tank. In Bartlett, 45 gallons once leaked because a pump was hit by a plow. Newton said small drips over a long time can also be a problem. Towns like East Hampton had to build a plant to remove the pollution and they had no one to sue to cover the cost.

Last year, the Effingham Zoning Board of Adjustment gave Meena a variance because the gas station would use state-of-the-art technology to protect groundwater. Still, Green Mountain Conservation Group, Ossipee Lake Alliance and a couple of abutters sued in Carroll County Superior Court, saying the gas station was prohibited in the groundwater protection district.

Judge Amy Ignatius issued an order June 2 affirming the ZBA’s decision to grant the variance, which essentially gave a win to the town and the gas station.
Meena’s proposal is going before the planning board Oct. 6 for site plan review starting at 6 p.m. The meeting will be held at Effingham Elementary School. Newton will be speaking there as well.