From the Conway Daily Sun

Ossipee—October 6, 2022—Selectman Jonathan Smith on Monday doubled down on the board’s decision to convert the Whittier Covered Bridge to pedestrian-only after hearing from town residents as well as getting questions from the Sun.

The town-owned bridge had been sitting on dry land off of Nudd Road for years after being closed in 2006. When it was in service, it connected Nudd, which is off Route 25, with Covered Bridge Road, off Route 16, a convenient short cut for locals.

The bridge is listed on the National Register of Historic Places. It was built in the 1870s but a bridge has been at that location since 1791. The Whittier bridge was taken out of service because it was in disrepair, selectmen said. It was put back in place with a combination of federal, state and local money.

On Sept. 26, selectmen announced it would be pedestrian-only, leading resident Dallas Emery to say “it doesn’t make any sense” to spend that kind of money on a walking bridge. 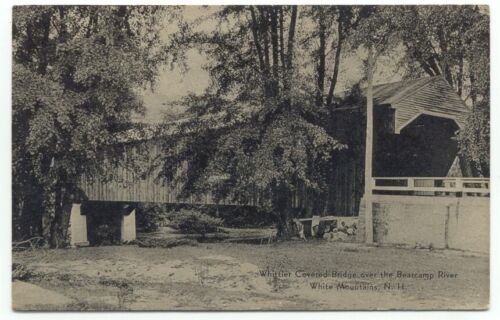 The historic Whittier Bridge, as seen in an old postcard.

At Monday’s meeting, resident Greg Howard was the first to speak. He wanted to “ask a few questions” after reading about the selectmen’s decision.

“Effectively, when did the town come to the decision that there had to be a change in use from it being a vehicle bridge to a non-vehicle bridge?” asked Howard.

Selectmen said the talks about that began a month ago. Selectmen’s chair Jonathan Smith said the town checked with engineers from DuBois & King Inc. and Hoyle, Tanner and Associates and the Department of Transportation. He said even the original application said making it a walking bridge was an option.

“Yes, it cost $2 million — the town invested $330,000 in direct taxation and the other $1.7 million is from federal and state funds, but it is a historic structure,” said Smith, adding that it was added to the National Register of Historic Places in 1984.

Smith said covered bridges that are in service are often being damaged by cars, while this bridge could be a nice picnic area with benches. He said there is a 50-foot right of way on each side that can be used for parking.

“This was not an easy decision, but really…we could have put in a utility bridge of any kind for a fraction of the money,” said Smith, who later added the board wants to make this a “nice space” for people to hang out, take pictures and have a picnic.

Howard replied that it’s “disappointing” that selectmen didn’t previously highlight the fact that Whittier Covered Bridge wouldn’t be open to vehicles. Howard said he used to swim and launch canoes with his sons there and he hoped there would be some river access on the south side of the bridge.

“I think that’s a great idea,” said Smith adding the whole goal is to make the property enjoyable.

Asked by the Sun if they would consider opening it in the summer as a compromise, Smith said that’s when people would want to use it as a park.

“I understand compromise but I don’t think that would work,” said Smith, adding traffic would also wear out the park.

The Sun also said there didn’t appear to be a vote on the bridge at the last meeting. Town Administrator Matt Sawyer and Smith said it occurred in non-public because the discussion pertained to “reputational” issues.

“We can take another vote right now if you would like,” said Smith, who then called for the vote and got agreement from fellow selectmen Sue Simpson and Martha Eldridge.

Chris Elliott asked if any engineering was done before the bridge was moved to determine if cars could use it. He said the current situation seems to be a “communication issue.”

“If the town had known ahead of time that cars were never going to be part of the project, we all would look at this a little bit differently,” said Elliott.

The bridge is rated for 6 tons, said Sawyer, adding there was a lot of concern about the amount of traffic it would end up handling.

Sawyer also said the town wouldn’t have gotten the funding for the project if the bridge wasn’t restored to look like it did originally. In addition, there’s been “exponentially” more traffic in Ossipee over the last few years.

Smith said the bridge is one of the largest covered bridges still in existence. It’s about 132 feet long. He said three cars sitting on the bridge would “kill it.” An average sedan weighs about 3,000 pounds (or 1½ tons). Engineers recommended that if traffic were to go over it, the weight should be limited to 3,000 pounds.

Asked by the Sun about whether there would be snowmobile access, Smith said that could be worked out with a local snowmobile club.

Bob Pustell said he was looking forward to using the bridge as a short cut but now that that possibility was eliminated, he expressed skepticism that Ossipee can maintain the bridge as a park.

“To be blunt, this town is not very good about taking nice care of park/ open spacey areas,” said Pustell. “Things are a little shabby at most of them. Would there any assurance this wouldn’t be equally shabby?”

Smith said he hopes the town and the community can maintain it together.

“It takes everyone to do their part,” said Smith.