Freedom—December 28, 2022—The New Year will mark our 20th anniversary as an organization, so we thought it would be appropriate to reflect for a few moments on our past 19 years instead of writing our traditional year-end news summary.

Newcomers may find it hard to imagine Ossipee Lake in 2003. Property owners were almost all seasonal non-resident taxpayers who closed their “camps” in October and opened them again in April or May. Year-round lake residents were few and far between. 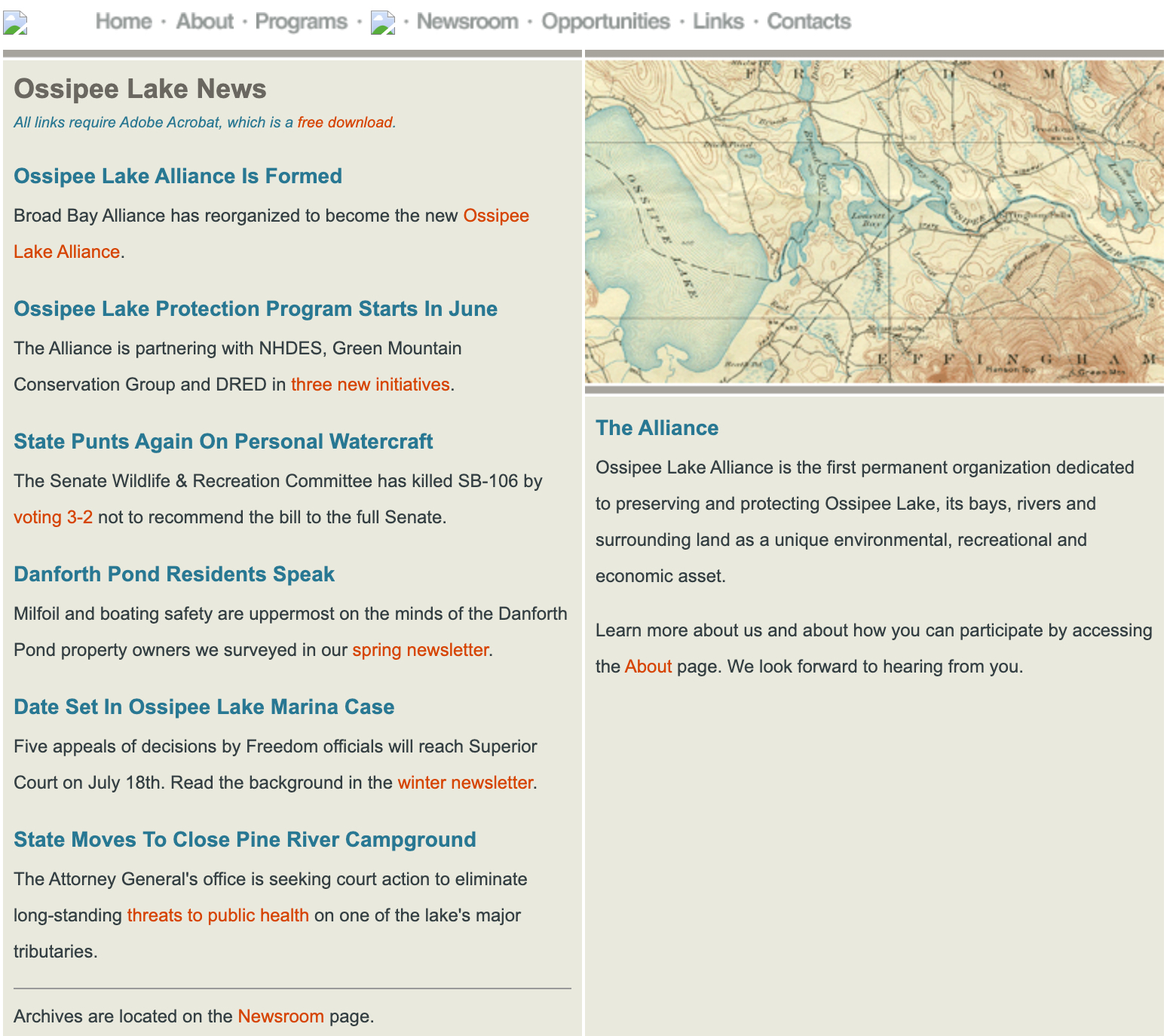 Our website on April 20, 2003. We reported on what lake property owners needed to know, most of which was unavailable elsewhere. Alliance Archives

Each Spring there was word-of-mouth news about changes that had taken place during the Winter.

Properties had been bought and sold, buildings constructed, and important land use decisions enacted.

Some changes were positive, others were not. Almost all of it took place out of the sight of lake property owners, and none of it made it into the local newspaper (there was only one back then).

Thanks to the Internet, however, change was in the air in 2003. Agendas for municipal board meetings, meeting minutes, zoning regulations, court orders—all manner of public documents were migrating online, making a drive to Town Hall unnecessary, and rendering photocopying fees redundant.

The task, as we saw it, was to triage this newly available information and circulate what was relevant to the lake community. A website where important issues could be publicized and debated, and a mailing list that ensured distribution of news in a timely manner helped us find an audience.

Not everyone was on board with this new level of transparency, especially as non-resident taxpayers began appearing at municipal meetings, lacking a vote but wanting to be heard. In time, however, things balanced out, and today we enjoy a level of municipal transparency that was hard to imagine 20 years ago.

In the coming year, we’ll take a look at some of the remarkable physical changes that have taken place on the lake since we set up shop. We’ll also take a look back at some of the lake news stories that remind us of the importance of being informed and staying involved. But beyond that, we’ll celebrate simply by continuing to do what we do.

Whether you have been with us from the start or are just discovering us, we’re glad you’re here. Happy New Year!

On behalf of our talented Board of Directors: