Freedom — December 27, 2017 — Last year’s biggest story, the Westward Shores expansion, segued into 2017 when a state judge ordered construction at the campground to stop so the court could consider the merits of Freedom’s lawsuit against Ossipee, which claimed the expansion threatened drinking water and violated zoning.

While attorneys conferred behind the scenes, an April flood put the campground on the front page again. Photos showed muddy roads, soggy campsites, and the Peninsula—a key focus of Freedom’s lawsuit—inundated and cut off from the rest of the property.

While spring floods are common, this one was notable for proving the campground is swamped at the 409′ water level rather than the previously presumed 410′ mark. That meant the business flooded three times more often than previously thought between 2000 and 2016.

After FEMA officials began looking into the case this summer, there was progress toward resolution. Stay tuned for more on this story in the coming weeks.

Camp Sokokis
In August, the Select Board announced that the years-long search for a beach on the lake might be over. First Selectman Rick Morgan said he had struck gold at Camp Sokokis, a small family business that not even many old-timers had heard of.

Controversy followed. While the $1.2 million purchase price seemed reasonable, it paled in comparison to the rumored offer of a free beach at the site. Morgan confirmed the no-cost offer, but said the town had already agreed to purchase the entire property, and the no-cost plan lacked sufficient parking.

Facing skepticism that the town could manage a campground, the board abruptly decided it would close it down, appearing to violate part of the purchase agreement. Seemingly thrown under the bus, Sokokis campers (who can’t vote) fought back with a noisy campaign questioning the decision to turn down the free beach.

In regard to the tax impact, the board blundered by comparing the cost to bond the purchase to the price of a cheese pizza. Although more thoughtful financial projections were eventually released, the town’s fiscal hawks saw red flags and peppered the landscape with “Do the Math” lawn signs opposing the deal.

After a public forum on October 30, many of those who had been on the fence waiting for more detailed information began to line up in support. But instead of reaching out to win over skeptical holdouts, the Select Board continued to publicly disparage them.

In the end, the board won the battle but lost the war. Most voters approved the purchase, but the tally didn’t meet the required two-thirds majority. In the aftermath of the loss, the Select Board accused the campground’s owner of breach of contract and fraud, saying she helped sabotage the vote in order to sell to someone else. A court hearing on the claim will be held on January 4.

The Usual Suspects
Donald Lee was back in the news when the environmental case that bears his name finally came to an end. Along the way, the Berlin Wall fell, email replaced snail mail, CDs sidelined vinyl, the country was attacked on 9/11, the Red Sox curse was broken, digital music replaced CDs (and vinyl made a comeback), smart phones took over our lives, and video streaming knocked-off the DVD business.

For 29 years, Lee out-maneuvered a succession of judges, elected officials, environmental bureaucrats, and the Office of the State Attorney General, forcing his neighbors to fight the fight and pay the price to the tune of hundreds of thousands of dollars. Lee will not be missed.

Presumably still at large is the pilot of a boat that crashed into a house on Deer Cove late one August night. The vessel, stolen from The Bluffs, was observed operating erratically before heading to shore at full tilt and embedding itself in the downstairs bedroom of a cottage, fortunately empty at the time. This apparent first for Ossipee Lake was enough of a novelty to capture media attention around New England.

The Environment
Our correspondent Bob Smart reported that the state would replace the spillway portion of the north side of the dam, with work beginning as early as the spring. Smart said the spillway would be the foundation for the replacement dam that was proposed in 2009 but deferred each year for lack of funding. The dam construction is an important story that we will cover in detail in the New Year.

How is Ossipee Lake Natural Area doing? Nine years after the adoption of its first-ever management plan, the lake’s environmental jewel is thriving, according to its state overseer, Sabrina Stanwood. Stanwood, who works closely with local organizations and the boating community to balance preservation and recreation at the site, said in November that rare plants and plant communities have made a comeback, and people are largely staying away from posted areas.

Remembrances and Thanks
Howard Bouve and Ned Hatfield, long-time supporters of the Alliance, died this year. Howie, as most called him, also served on our board for many years. Their service to Freedom extended far beyond our organization and benefitted many groups and individuals.

We will also miss Louise Anderson. She was a child when her parents built a summer cottage on North Broad Bay in 1929, memories of which she recounted in an article we published several years ago. That’s her with her Scottie dog in the sketch on this page, and it’s the way we will remember her. 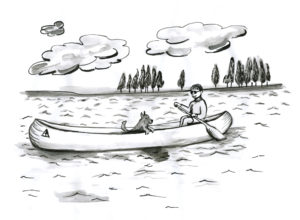 Our thanks this year go to Bob Smart, whose Smart Reports continue to be essential to our understanding of the lake, and Dave Eastman, whose informative wildlife articles are always a welcome break to the news cycle. We are grateful also to the reporters and editors of the Independent and the Conway Daily Sun for their continued coverage of the issues that matter on the lake.

To those of you who lent financial support or contributed ideas about what we do and how we can do it better as we enter our 15th year, we are grateful for your time and involvement. Thank you!