Freedom—May 15, 2020—The most common question we receive by email is: What’s going on with the lake level? We hear it year-round, but most commonly in the spring. This year is no exception.

It’s not surprising. For many property owners, spring means cleaning up the debris brought to shore by March winds as the ice sheets move round and break up. For this group of people, a longer period of low water means more time to get things done before summer.

For others, the focus is boating. Getting the dock or mooring in the correct position and getting the boat out of storage and into the water are the main events. For boaters, the faster the water rises from winter level to summer level, the better.

Perhaps for most, however, the hope is for a balance: Low water long enough for a comprehensive shoreline clean-up, and summer-level water in time to get the boat launched early to maximize the season. 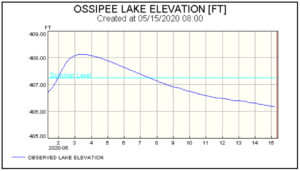 The lake level is always accessible on the Alliance website’s home page.

In fact, that perfect balance is what the state and local folks who manage the water level try to achieve each year. But as with any plan, things work out some years better than others.

Bob Smart has been observing and writing about the water level for years from his home on Broad Bay. In his April 6th “Smart Report” he wrote that Concord’s water level management plan this spring would be the same as in previous years.

That meant the water level that day, 408′, would be lowered to about 405′ so that stop-logs could be safely placed back in the north side dam sometime in late May. Then the water would be allowed to rise to the summer level of 407.25′ by June 1.

But as Bob knows, Mother Nature is always a wild card on Ossipee Lake. The lake is fed by multiple rivers and tributaries, and the water heads east to a single outlet, the Ossipee Lake Dam. Rain events can bring the water level up quickly, throwing the game plan off kilter.

April was a rainy month, with an inch or more of precipitation falling each day on the 13th, the 27th and the 30th. More than an inch of rain also fell on May 1st. As a result, the lake level varied widely, and on May 3rd it was where it was when Bob wrote about it at the beginning of April—408′. 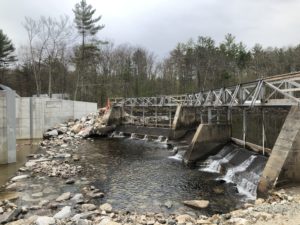 Half the stop-logs are in, the rest will be placed after this weekend’s predicted rain.

Since May 3rd, the lake has receded to 406.16′. It’s a level that means those who were late in getting their shorelines cleaned up can still do so, and those who launched their boats early are getting acquainted with sandbars they never knew existed.

Meanwhile, the state is at work. Jim Gallagher, Chief Engineer of the Dam Bureau, told Ossipee Lake Alliance that he had operators at the dam yesterday to raise the stanchions and put in two of the four levels of stop-logs.

“We didn’t put them all in because we expect rain on Friday and early next week, but when conditions allow, we will put in the other two levels,” he said.

In short, the plan this year is the same as the plan last year and the plan the year before it: Get the water level stable at 407.25′ by June 1.

As always, however, Mother Nature will have the final word.