Freedom—July 22, 2021—Tuesday’s meeting of Effingham’s Zoning Board of Adjustment didn’t produce a decision on the controversial proposal for a gas station at Boyle’s Market convenience store on Route 25.

But it did answer a number of questions that surfaced at the board’s July 8 hearing on the application—namely why the applicant thought he had an understanding with the town about the plan, and why the gas tanks were installed before the planning board reviewed and approved the site plan. 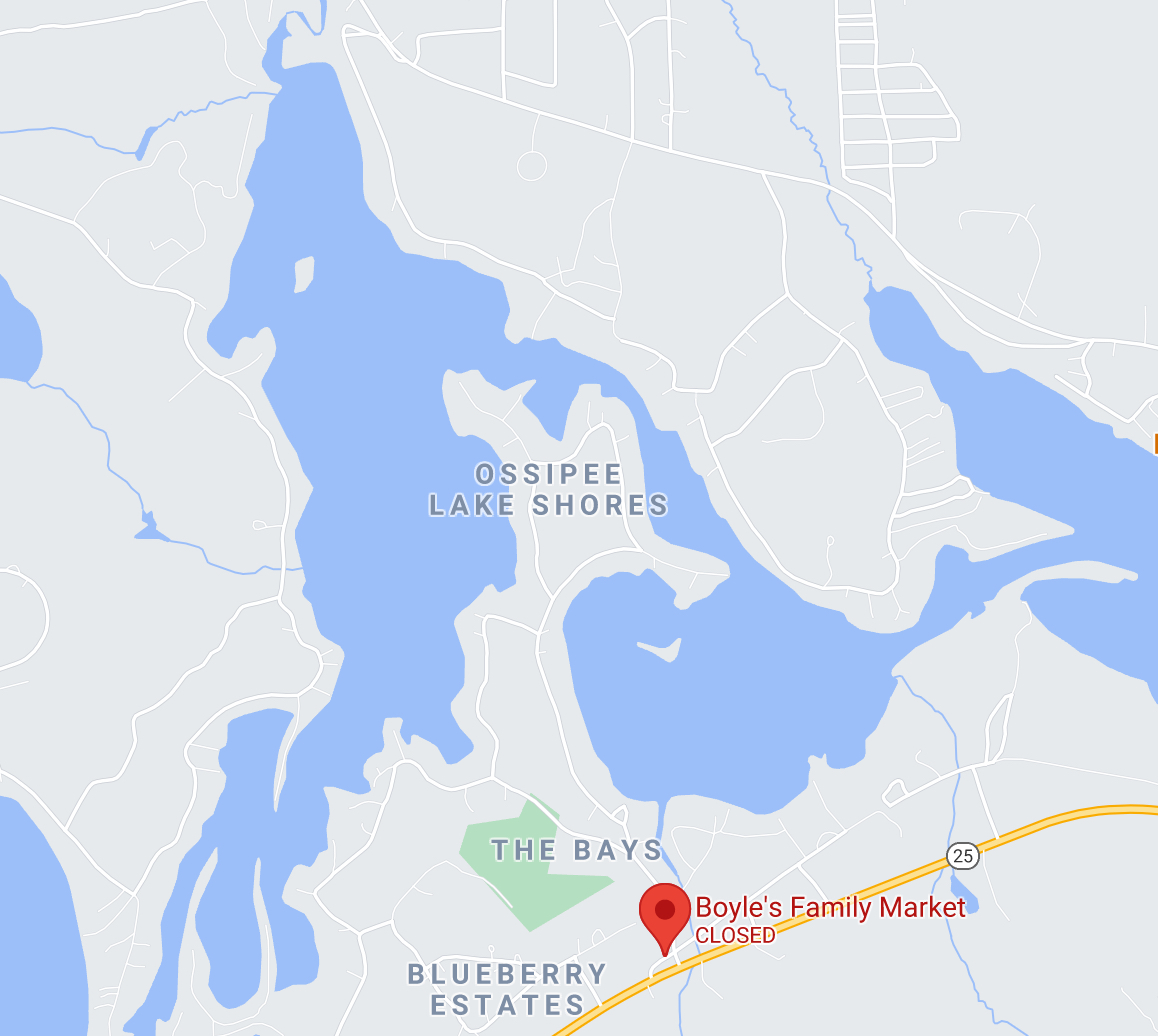 The gas station proposed for Boyle’s Market is adjacent to Phillips Brook, which flows into Leavitt Bay on Ossipee Lake. Photo: Google Maps

Conway businessman Pankaj “Prince” Garg purchased the convenience store this year with what he and his agents say was an understanding that he could restore the gas station business at the site by obtaining the required permits.

The previous owners of the business, David and Lynn Boyle, made “an economic decision” to close the gas station six years ago and removed the pumps, tanks and related equipment under state supervision.

On March 29, Effingham’s ZBA granted a special exception for Garg to pump gas again, and sent the application to the planning board for site review. The planning board sent it back, saying the ZBA had not considered the fact that the business is in the Groundwater Protection District, where gas stations have been prohibited for more than a decade.

Garg’s agent for the project, Mark McConkey of Freedom, said the “understanding” his client thought he had with the town on an approval reflected the fact that the ZBA failed to properly inform him about the need to apply for a variance that addressed the Groundwater Protection Ordinance (GPO).

In response, board chair Theresa Swanick said it was “not the responsibility of the town to inform [applicants] about all steps in the process.”

“I take issue with you saying it’s the town’s obligation,” she said, to which McConkey replied that it should be a “shared responsibility.”

In regard to the telephone calls, zoning officer Boyden said there was never an approval or denial of the application, to which board chair Swanick added that “Preliminary consults are non-binding.”

As to who authorized installation of the gas tanks after the ZBA’s approval, but before the planning board could review it, Jim Doucette, a realtor working with McConkey on the project, took responsibility.

Asked by ZBA member Jim Pittman about the rationale for the decision, Doucette said it was made when Garg was out of state for an extended time. Having been authorized to make decisions on Garg’s behalf, Doucette said he issued the green light after realizing the subcontractors lined up for the construction might not be available again until next year if the work didn’t immediately commence.

“We took that risk,” Doucette said. “We apologize. We did not mean to be disrespectful.”

Asked by board member Pittman to confirm specifically that no one had a building permit for the work, Doucette answered “Correct.”

Doucette’s apology to the board was echoed by business owner Garg, who said they had not meant to “hurt anyone’s feelings.” He said he and his wife looked forward to doing business in Effingham and hope to employ eight to ten people.

A Fail-Proof System
Central to the gas station proposal is the applicant’s claim that gas station equipment is “so much better than five years ago” when the previous owner of the business closed the pumps rather than pay to bring the equipment into compliance.

In a lengthy discussion, contractor Winslow and Vermont-based engineer Chris Williams pointed out that the plan’s double-walled fiberglass tanks and electronic leak detection systems have DES and EPA approval, and are based on California standards, which they said are the strictest in the nation. Business owner Garg spoke at length about the safety and back-up systems and said he would personally oversee them.

The gas station’s systems will be “fail-proof,” Winslow concluded.

Public Comment
During the public comment section of the meeting, Effingham resident Mellisa Seamans spoke in favor of the application for its potential economic benefits to the town. Her husband, Chris Seamans, asked if the Boyles would have had to go through the same process had they decided to bring the station into compliance rather than closing it.

Swanick explained that the “non-conforming use” would likely have been renewed in 2015, but after six years of discontinued use, it was no longer relevant whether there had been a gas station there or not.

Others spoke in opposition to the application. Billie Lunt of near-by Storage Road asked the board not to yield to those who “ask for forgiveness, not permission,” adding that the proposed economic benefits could turn into the opposite because of the potential threat to groundwater.

Referring to ZBA member Tim White’s comment at the meeting that the town was “rolling the dice on groundwater,” she said “the voices of the people are not being heard regarding protecting the lake.”

Effingham resident Eve Klotz said it concerned her that a developer would proceed with construction work without “doing due diligence” and “not having permits.” She called the situation “unfortunate” for the applicant because the people representing him had “made mistakes.”

Local environmentalist Corey Lane echoed her previously-submitted letter to the board by pointing out they had not yet addressed the “five-point test” required by the ordinance for a variance. Board chair Swanick said the five points will be addressed when the ZBA begins its final deliberations.

Swanick continued the meeting to Thursday, July 29, at 7 p.m.