Freedom—December 12, 2021—Before we publish our annual round-up of the year’s lake news, we thought it would be instructive to take a look at what was top of mind in our area a decade ago, in 2011.

That was the year Governor Lynch signed legislation granting lake residents something they thought they already had—ownership of their shorefront property above the 407.25 ft. mark. The two-year deliberation over the obscure but devastating ‘410 Rule’ was “civilized, and the political process was smoothly managed by all hands,” we reported at the time. Imagine!

You won’t be surprised that milfoil was a 2011 newsmaker. Research we commissioned that year revealed what every elected official knew and didn’t want to talk about: the state was covering just 12% of the cost of controlling milfoil, forcing towns like Freedom, Ossipee and Effingham to pay the rest. Half of the state’s infested lakes had no control program at all.

N.H. Fish and Game came to Ossipee Town Hall with a plan to make it easier to access the lake by improving the facilities at its no-fee Route 25 boat ramp. Freedom, Ossipee and Ossipee Conservation Commission sent representatives to the meeting to demand a state-funded milfoil prevention program at the site as part of the improvement plan. Nothing ever came of it. 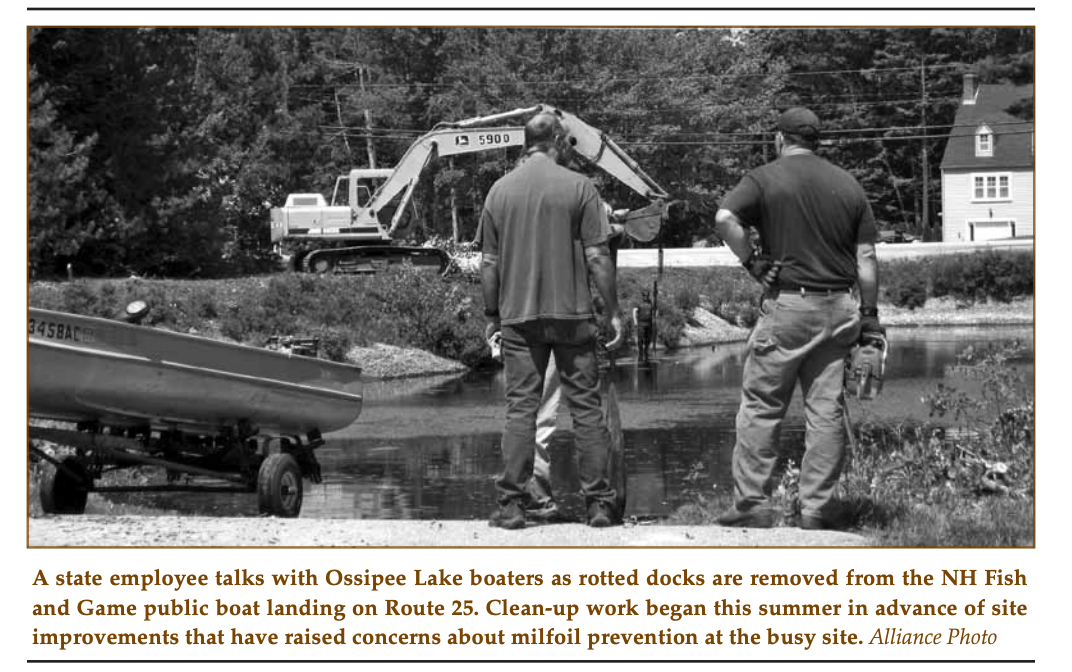 You didn’t have to be a long-time lake resident with a memory of the devastating 1947 fire to be alarmed when an arsonist began stalking an area between Madison and Freedom that included the Ossipee Pine Barrens. A house fire on Leavitt Bay further set nerves on edge but proved to be accidental. After an arrest in September, the fires stopped.

Eagles are now a common sight on the lake, but a decade ago they were rare enough that their appearance made news. Photographer John Rowe (owner of the much-missed Broad Bay webcam) kept eagle watchers informed on Facebook, while Daymond Steer of the Conway Daily Sun wrote a nifty piece on the lake’s landlocked salmon, a tasty eagle treat.

In other wildlife news, Freedom’s Forest Advisory Committee installed a loon nesting raft at Trout Pond, while volunteers kept watch over nests around the lake and bays. No local births were recorded, however. Bat populations continued to be decimated by a ‘white-nose’ fungus, prompting state officials to say crops and forests were in harm’s way due to increased insect populations.

On the weather front, the lake got lucky twice. Hurricane Irene devastated Vermont and northern New Hampshire but spared us. We were also spared the disaster that took place all around us when a heavy snowstorm hit in October while trees were still in leaf.

In June, we noted the death of Jody Connor, a well-known DES official whose influence helped shape every then-current state initiative to preserve and protect our lakes—from the Exotic Species Program to the Volunteer Lakes Assessment Program to legislation on acid rain, water quality, and cyanobacteria. DES Commissioner Tom Burack called Connor “an iconic colleague,” and “an extremely humble person, never seeking public accolades although he was deserving.” He was all that and more, we wrote in our remembrance.