Freedom—December 30, 2019—January 2019 kicked off with a surprise petition by 37 Effingham residents who wanted to scrap the town’s 19-year old zoning ordinance in order to “promote the live free or die culture.” The petition generated a lot of discussion but little support. It went down in flames at Town Meeting on a vote of 229 to 89.

Land use laws were also on the ballot at Freedom’s Town Meeting, where voters amended the zoning ordinance to permit solar energy systems in all districts, subject to a set of requirements consistent with “the wishes of the community to retain Freedom’s rural character.”

Construction Projects
Reconstruction of the Ossipee Lake Dam began in August. Postponed repeatedly for more than a decade, the project was finally scheduled to start in the spring, but was postponed again because of funding uncertainties. Playing the optimist, Chief Dam Engineer Jim Gallagher issued an RFP for the project in April, picked a contractor and waited. His decision paid off when the governor released the funds on July 31 and the construction team hit the ground running on August 5. 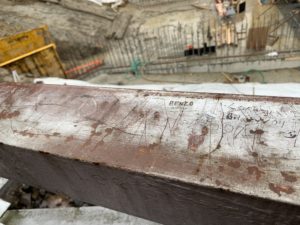 Years of graffiti scratched into a steel railing on the walkway of the Ossipee Lake Dam will soon be history when the new dam is completed.

Work will commence in the spring on another long-delayed construction project, the replacement of Danforth Brook Bridge on Ossipee Lake Road. The state will pay 80% of the nearly $1.2 million cost to replace the 1925 structure, which is more than 40 years past its life expectancy. Construction could begin as early as April and will likely continue into the fall, leaving Danforth Pond boaters without a river entrance to Ossipee Lake for the duration.

Milfoil
Lake Hosts staffed boat ramps this summer thanks to the Tri-Town Lake Host program, which organized and coordinated coverage days and work hours for courtesy milfoil inspections. At the state’s Route 25 ramp, Lake Host Julie Lepkowicz found herself overseeing the state’s first test of a waterless boat cleaning system, which proved to be popular with the boaters who tested it. 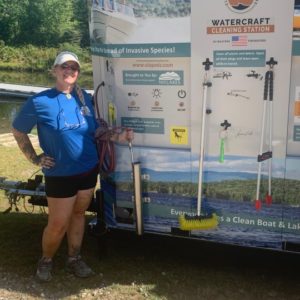 Boaters whose vessels are registered in New Hampshire have passively helped pay for milfoil control since Concord mandated that $9.50 of every boat registration be deposited in the Lake Restoration and Preservation Fund. Now, owners of powerboats registered out of state will have to pay their fair share by purchasing and displaying a $20 annual decal in order to use state waters.

NH LAKES introduced the decal bill in February and it quickly gained support from lake associations, including ours. Members of the associations lobbied legislators, and by July the program became the state’s first significant new source of milfoil control revenue in a decade.

Revenue from the decal program will help, but the Lake Restoration and Preservation Fund will continue to be underwater until the state fully funds it. In its most recent report, DES said it awarded $338,789 in milfoil control grants in 2017 against requests of $1.1 million. Lake towns like ours made up the difference.

Despite ongoing milfoil removal efforts, the invasive weed continued to spread this year. Chief among the year’s new finds was a large mass in the Westward Shores boat basin. But there was also a major find in the Danforth Pond system that was either newly formed or was missed in the last milfoil survey. 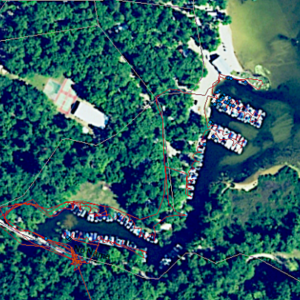 Westward Shores boat basin, to the southwest, was the site of a major new milfoil infestation this year.

Cyanobacteria
Whether due to changes in water conditions or increased vigilance by residents, the number of cyanobacteria reports continued to rise. A patch found in Danforth Pond in August resulted in the fourth state advisory for the lake system in the past two summers. Cyanobacteria are naturally occurring and can be benign. But in its most potent form it can trigger harmful toxins that cause nausea, vomiting, diarrhea, and skin irritations in humans. It has also been known to kill pets that get into it.

Legal
It took a year, but old-fashioned detective work and social media networking helped the Marine Patrol crack a 2018 hit and run boat crash case. Massachusetts resident Matiah Haloon was charged with a Class B felony for damaging a moored vessel at Long Sands and leaving the scene of the accident. She pleaded guilty to a negotiated charge of committing a Class A misdemeanor and agreed to reimburse the damaged boat’s owner and insurance carrier.

Camp Marist began offering scholarships to Effingham’s children again this year. The decades-long tradition was put on hold in 2015 after the town ruled the Marist Brothers enterprise no longer qualified for a property tax exemption. The camp sued, and a State Supreme Court judge found in favor of the camp. A camp spokesperson said he hoped that reviving the scholarships would begin to restore “the historical positive rapport” between the camp and the community.

Northgate Resorts continued to be in litigation in two state courts. Locally, the Westward Shores campers who are suing the Michigan-based company received good procedural news in September when a Superior Court judge confirmed they had standing to bring claims in regard to Count III of their multi-count lawsuit. Count III seeks a declaratory judgment that improvements made to their camping units constitute a lawful non-conforming use under Ossipee’s zoning ordinance.

The court did not rule, however, on whether the plaintiffs have standing as a ‘class’ in regard to Count V of the lawsuit, which alleges that Northgate violated the state’s consumer protection act by helping sell 23 camping units to new owners without disclosing that the company was in discussions with officials to require the units be expensively brought into compliance with zoning or else be removed from the property. Northgate has opposed granting class status to the plaintiffs.

As the parties waited for a determination on Count V and were preparing to enter arbitration in January, the judge on December 9 issued a surprise ten-page “interim ruling” indicating she was prepared to dismiss the case in its entirety because of her doubts that Superior Court was the correct venue for resolving the issues. She opined that the plaintiffs could seek resolution of the zoning issue from the Ossipee ZBA, and reasoned that allegations of misleading buyers could not be addressed without first resolving the zoning question. She gave the parties 15 days to file objections to her plan to dismiss.

In another Northgate case, the company is headed to State Supreme Court in regard to its MiTeJo Campground in Milton. Northgate has alleged that Milton ZBA officials erred when they denied the company’s plan to increase the number of campsites and add amenities that include a mini-golf course and a waterslide. The ZBA ruled the plan had regional impact and denied the application as inconsistent with the zoning ordinance and town master plan. Northgate appealed to State Superior Court, where a judge upheld the ZBA’s ruling in April.

The year also saw Northgate expand further into New Hampshire with its September purchase of Glen Ellis Campground in Glen.

A Milestone Marked
The state’s management plan for Ossipee Lake Natural Area was the result of an improbable coalition of state and local officials, environmentalists and members of the boating community. Its adoption ten years ago this summer ended more than 30 years of state neglect and rancor over the property’s future. Thanks to the plan, rare plants are making a comeback, and boaters can use a large section of the shoreline for recreation. A rare win-win for the lake that should not be forgotten.

People
Tom Beeler died in April at age 74. As editor of the Carroll County Independent, he worked hard to maintain the paper’s legacy of quality reporting while struggling with the financial realities that news weeklies face in the digital age. We will miss his editorial voice.

We eulogized Chuck DePew in October as one of the driving forces behind the Freedom Town Forest purchase. We will also remember him as a genial neighbor, and as someone who was fearless in speaking truth to power. He was 89.

Fearless also describes George Eisener, who led a 2006 taxpayer revolt against Ossipee officials for targeting Long Sands residents with massive property tax increases. After the town conceded the increases were unjustified, he and his neighbors received almost $2 million in abatements. George passed away in November at age 93.

Dave Eastman was a gentle warrior. A helicopter pilot in the Vietnam War, he received a Silver Star, Distinguished Flying Cross, Bronze Star, and 34 Air Medals. Then he became a career forester, ecologist and nature writer. His “Country Ecology” essays, heard on WMWV and seen in the Conway Daily Sun and the Alliance website, are part of his legacy. He was 76 and lived in Tamworth.

As 2019 draws to a close, all of us at Ossipee Lake Alliance send our very best wishes for a Happy New Year and New Decade!